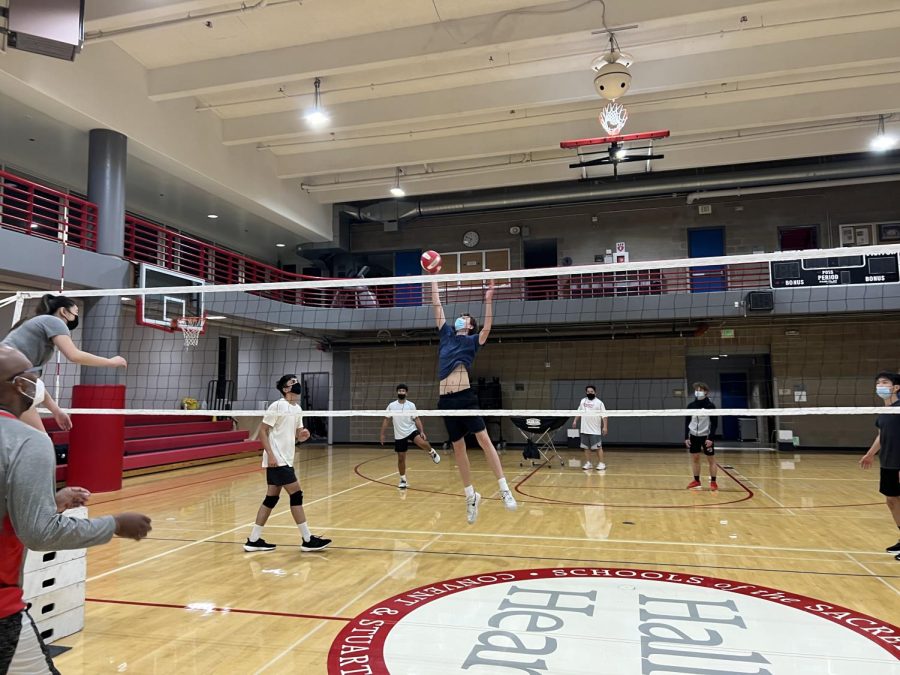 Junior Dylan Minvielle blocks serve during practice. Minvielle has neve played voleyball and will be playing the front row middle position for the upcoming season.

In the upcoming Spring sports season, Knights will have the opportunity to compete for their school on a new Boys Volleyball team, which was started by two sophomores.

“I decided to start the volleyball team because ever since I first played in seventh grade I’ve enjoyed the game and wanted to bring that experience to all my friends in high school,” sophomore Evan Marriot said.

“Both Evan and I played in middle school, and we wanted to bring that experience to high school,” said O’Brien. “We figured many people would be interested after watching the girls team play, so we decided to try it out.”

Marriott and O’Brien say that at first the idea of starting a volleyball team seemed unrealistic; however, as they probed for interest, their intentions were well received by the student body.

“To gather enough initial support for the team, we decided to spread the word throughout the sophomore grade,” Mariott said.

Mariott says that the team’s popularity increased drastically when they received support from the school administration, specifically Elena Desantis.

“Ms. Desantis sent an email to the whole school about the team, spreading it to the other grades,” Mariott said. “This is when the team really started to take off and garner much more popularity.”

Marriott and O’Brien have, as of now, recruited 20 students to play volleyball this Spring.

“I’m very excited for the upcoming season,” sophomore Johnny Hickey said, who transferred to Stuart Hall from School of the Arts. “When I first transferred to this school, my first thought was joining the volleyball team.”

While there are enough for two teams, Marriott says that he is not sure if there will be both a JV and Varsity team.

“It has been confirmed that there will be one varsity team made up of a maximum of 14 players, and we will be competing in a bay area league with other schools,” says Mariott.

Stuart Hall will be playing in the Bay Counties League West, which includes other San Francisco high schools such as University, Drew, International, and Urban, and their first game is Mar. 3.

“It means a lot that I’ll have the opportunity to compete for my school in a sport that I love,” Marriott said. “What makes it even more exciting is that I’ll be able to share my experience with my fellow Knights.”