Sending the Message of Service 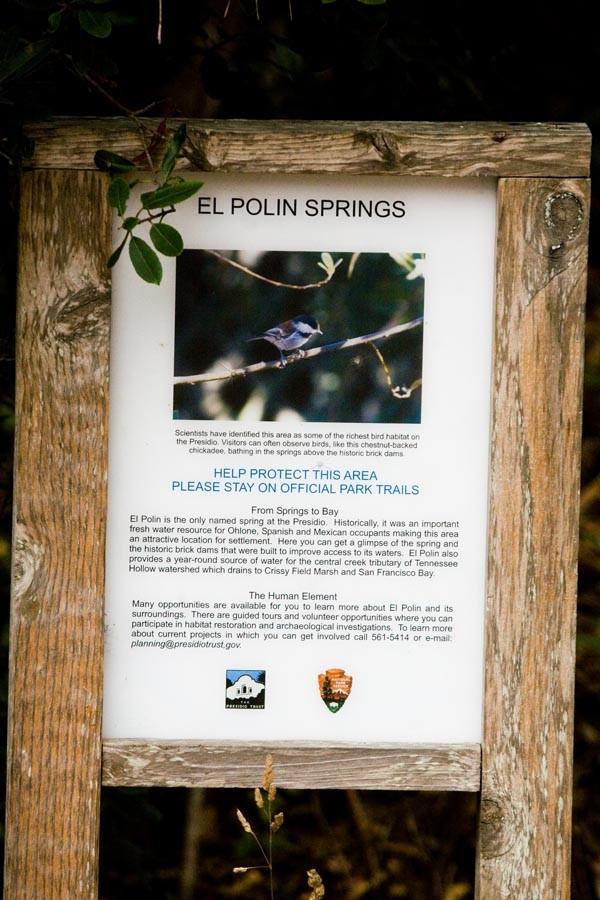 The sign explaining the significance of El Polin Springs

On Thursday, October 28, Convent and Stuart Hall High School students boarded buses heading toward a multitude of service sites. While the seniors went down to visit our sister school in Atherton, freshmen, sophomores, and juniors were sent out all around the city, helping serve the community through dozens of programs.

As a Junior, I was assigned to help out at a habitat restoration site in the Presidio called El Polín Spring. Initially, I had little enthusiasm in the project, seeing it as a way miss classes. I had the preconception that I would merely be shoveling dirt, weeding, and planting. However, upon arrival at the sight, I realized that there was much more to the site than I had previous thought. First, the site was peppered with small plants, a hint that the area had recently been planted. Secondly, I was met by two, I would say, eccentric park rangers, eager to work with our large group of primarily cross country runners were scheduled to run right after the community service program.

Our group started with a historic tour of the site, noting the significant role that the military played in the area. I was assigned to pull up invasive plants along a cool redwood grove. As I moved down, I realized that I had found myself in a in a deep channel. Once the ranger noticed that I was inside this channel, he began to tell me about World War I. I was puzzled at first until the ranger revealed to me that I was standing in a trench used to test out mustard gas. It was at this point that I really began to take note of my surroundings, hoping to find something unusual and possibly astounding.

This hope was quickly realized as I headed down toward the spring that gave the site its name. At this time, our ranger was giving us another tour, this time on the habitat of the area. During this tour, I looked up and as my eyes scanned the hill above, I, along with many other students, noticed a hawk swoop down and pick up a mouse. The ranger was just as surprised as we were, noting that he had never seen such an amazing sight.

Not only did I notice a World War I trench or a hawk swooping down for a kill, I also was able to connect with my fellow classmates. The experience almost served as a retreat for us, allowing us to socialize and get to know one another even more. After helping the rangers, the team and I walked a short distance to Paul Goode Field, the venue for our race. By the end of the day, I had an entirely new understanding of service, realizing the benefits of helping out whether it be learning about the history or appreciating the nature of our community or just being able to catch up with others.