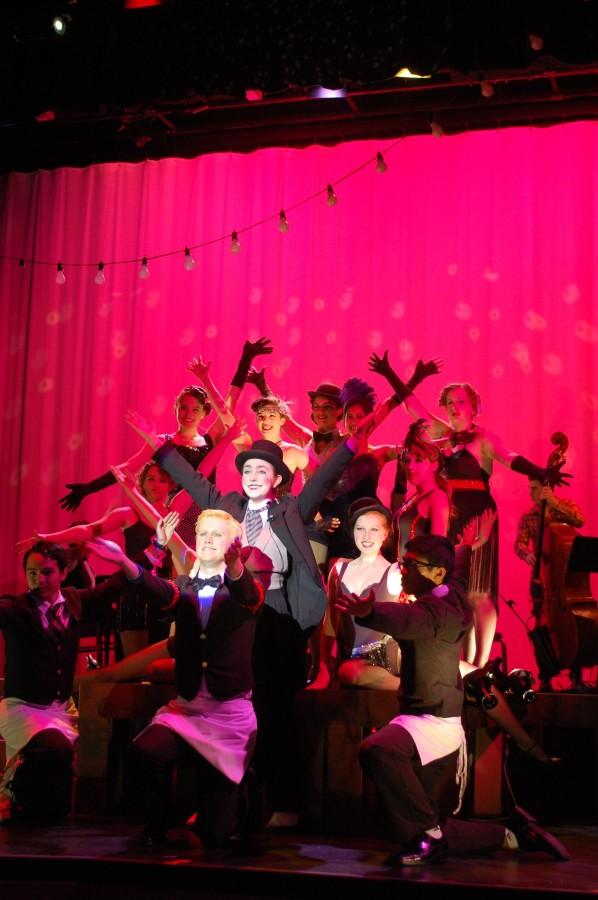 Thursday night’s opening performance of “Cabaret” at the Syufy Theater was one of the most impressive musicals we’ve been treated to by the Convent/Stuart Hall drama department. Based on Christopher Isherwood’s “Berlin Stories,” which were inspired by his three-year stay in Berlin in the early 1930s, is truly a musical for scholars. The stories were adapted for the stage as a play in 1951 and were then re-imagined as a musical in 1966 when it won the Tony Award for best musical of the year.

The musical unfolds as the Weimar Republic was in full swing and the Nazis were gaining strength within Germany. The story focuses on the relationship between Sally Bowles, a young nightclub performer, played by senior Lauren Arnold, and her friend and roommate, the American writer Clifford Bradshaw, played by senior Christian Gehrke. Much of the action takes place in the seedy Kit Kat Club, where Sally performs. The subplot of the romance between Fraulein Schneider (junior Maddie Kelley) and her Jewish suitor Herr Schultz (freshman Tannor Bragg) is a harbinger of the chilling turn of events that will change the world in a few years.

Most audience members are familiar with songs such as “Wilkommen,” “The Money Song,” and “Sitting Pretty,” which were strongly performed, but it is other numbers in this musical that reflect the darker side of the time. “Tomorrow Belongs to Me” is sung by the Hitler Youth and it is fascism at its scariest. In “If You Could See Her,” the symbolism is huge as a woman dressed as a gorilla (read Jew) is sung to by her boyfriend, who tries to convince the audience that if you could see her through his eyes, she isn’t “ugly”. This is powerful stuff for the genre that brought us “Bye, Bye Birdie” and “Anything Goes”.

All the actors, with the help of director Ms. Rickard, Billy Philadelphia, and choreographer Erin Hewitt, ably carried out the singing and dancing. Doug Greer (SHHS ’10, Vassar ’14) planned additional choreography. Musical regulars Steven Wooley and Marco Lancieri, both Stuart Hall seniors, gave nicely honed performances as Ernst Ludwig. The freshman class of Stuart Hall is filled with actors that made their debut in this important staple of the American musical theatre.