Paul Schwarzbart: A Tale of Struggle and Hope 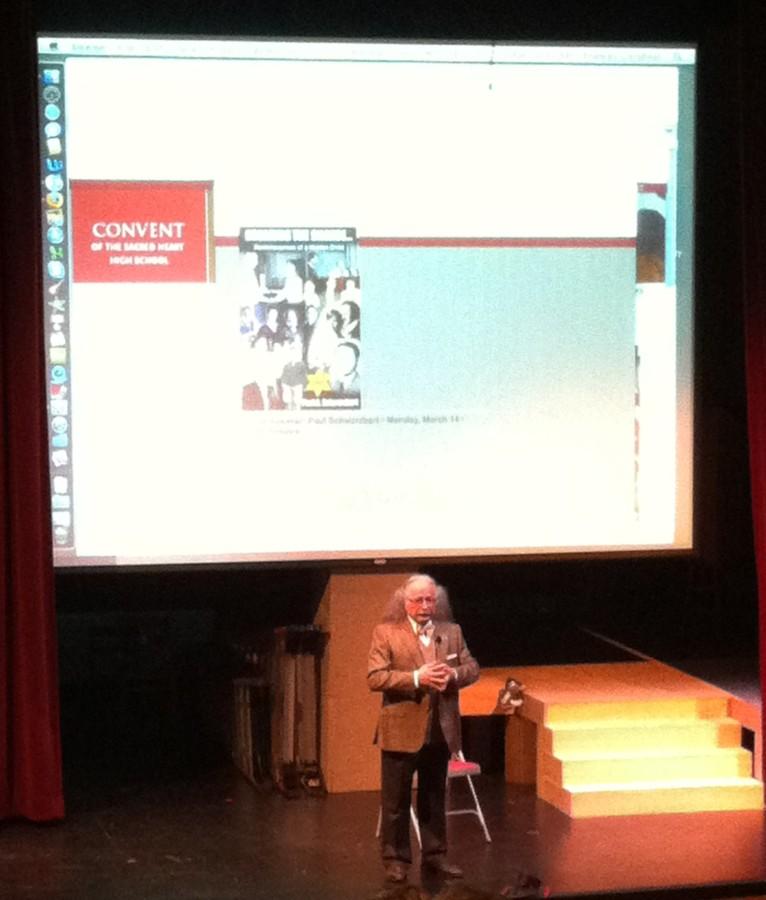 On Monday, March 14, Stuart Hall High School together with Convent of the Sacred Heart had the pleasure of hosting author Paul Schwarzbart in the Syufy Theatre.  Schwarzbart, who as a young child was able to escape the imminent danger of the Jewish genocide brought about by Hitler in Nazi Germany, told the story of his life during the World War II era. Despite the unfortunate limitation of time, he was able to convey the major points of his journey.  One of the most notable stories he told was the one about leaving his mother behind in order to be hidden by the secret Belgian underground, an organization that helped many people in similar situations. He gave a surprisingly upbeat rendition of the events he experienced while touching upon many serious points. He was able to lighten the presentation with a little humor such as his profound statement on why being baptized a Catholic wasn’t all that bad, especially when compared with the painful reverse situation of converting from Catholicism to Judaism. Although the subject discussed was macabre in nature, he gave an engaging, educational, and entertaining presentation of his story. Senior Albi Solana recounted, “People always hear about the Holocaust, but rarely do we have the chance to put it in perspective and look through the eyes of a survivor, one who lost so much but kept hope in the face of death and endured much pain, prejudice, and uncertainty.”

In his book “Breaking the Silence: Reminiscences of a Hidden Child,” he gives an in-depth look at his escape from the holocaust which was aided by both the altruistic acts of others and his own resolve. He was born in 1933 in Vienna, Austria, where his family had lived since the 1700’s. When he was five his family traveled to Cologne, Germany, where they with great difficulty were able to illegally sneak out and escape to Belgium. In May of 1940, Paul’s father was put under arrest and sent away to a labor camp, and was sadly never seen again by his family. Paul and his mother stayed in Belgium where she got a job with a Belgian family by the name of Exsteen. In 1943 a member of the underground approached Paul’s mother and told her that he could get Paul to safety but she would have to give him up to the underground and not even know where Paul was to be taken. With great bravery and selflessness, she gave Paul to the man, and her son was taken to a Catholic home for boys in Jamoigne, Belgium. He spent the duration of the war at this school.

Although there were many Jewish boys being hidden at the home, none, including Paul, knew that there were other Jews being hidden, as they all kept their refugee status completely secret. After he was liberated, Paul returned to find his mother, and they waited together for Friedrich, Paul’s father. At this time, Schwarzbart recalled, “While the Germans were in power, people were disappearing left and right everyday…Now that the Germans were gone, people would start reappearing, right? Unfortunately, that was not the reality.” This reality hit close to home, as he and his mother discovered that his father had been killed at Buchenwald tragically just months before he would have been liberated. In 1948, Paul and his mother emigrated from Belgium to the United States and lived in New York for a short period of time.  Eventually they left the east coast and joined relatives in Petaluma, CA. Paul went on to attend UC Berkeley where he pursued a career in teaching. He married in 1969, and he and his wife have two sons. Schwarzbart’s harrowing story was one of great tragedy but also one of inspiration, as the tribulations he endured paved the way for a bright future, one that could have all to easily been taken away.