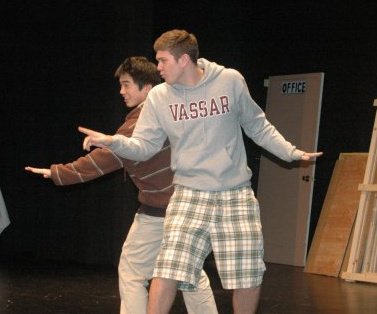 The quintessential American musical, “The Music Man” debuts at the Syufy theater on Thursday, March 11 at 7:00 and runs through Saturday, March 13 at 2:00.  Rehearsals are in full swing for the production, which is directed by Ms. Rickard. While Mr. Philadelphia provides music direction, Ms. Pirkle heads choreography. The original Broadway production was spearheaded by Meredith Wilson in 1957, and received rave reviews and went on to become a popular movie.

“The Music Man” is the story of con man Professor Harold Hill played by versatile senior, Doug Greer, who “sells” musical instruments and band uniforms to the simple folk of a small-town in Middle America. He convinces them that he is organizing a band and after collecting their money, he skedaddles out of town with their cash. Enter Marian Paroo, the librarian, portrayed by Convent Sophomore Madeleine Kelly, who soon becomes the object of Professor Hill’s affection. The tale unfolds through vibrant music and song, which reflects the innocence of the story, set in Iowa in 1912.

When asked about the difficulties of tackling a role so familiar to American audiences and making it his own, Doug Greer said, “The main difficulty is making the role different, but good at the same time. I want it to be good, yet not be the same Harold Hill people have seen over and over again.”

Junior Steven Wooley sings and dances his way into the heart of the mayor’s daughter performed by Convent Junior, Lauren Arnold. Steven, who has been a member of the Coed Choir since his freshman year, was asked why the play still appealed to audiences after all these years. In reply, he stated, “Because the themes in the musical, like the con man and the small American town, last longer than the period.”

When the band strikes up the overture and the first whistle blows, you’ll know you are in for a vibrant evening of song and dance. Tickets are $5 at the door.