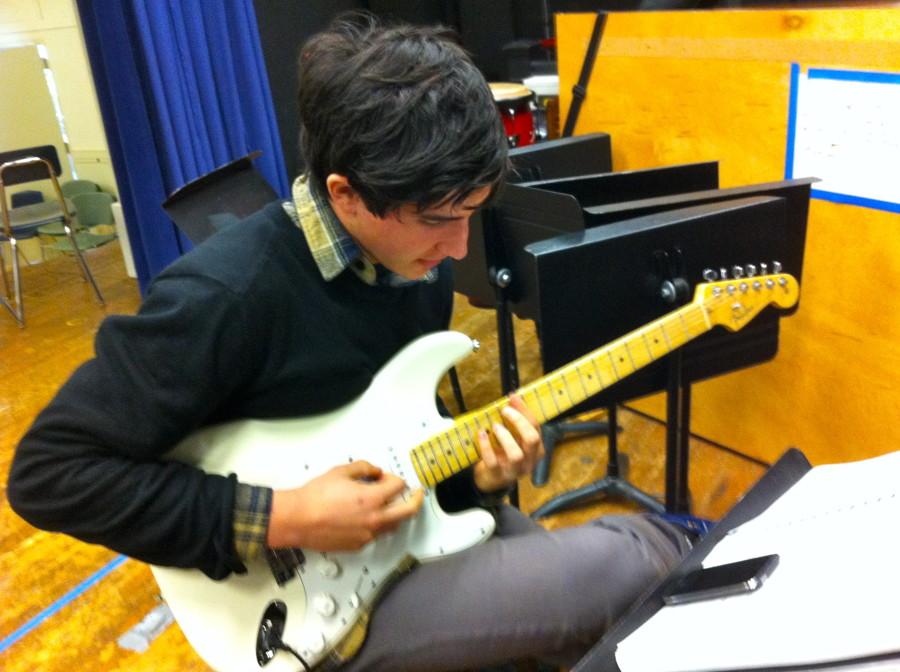 Throughout the years, Stuart Hall has had numerous students with amazing musical talents who have entertained and amazed us with their skill. Some of the most recent musicians in our school include Lucas Long, Patrick Wong, Connor McKeon, and Kailen Santos. Long hours of practice and dedication have made musicians of Stuart Hall some of the best performers in San Francisco.

Lucas Long can always be found practicing his guitar onstage during breaks and lunches. Being part of a band is hard work and requires plenty of practice. Lucas manages to keep his cool by taking time to play bits and pieces of songs to make sure he doesn’t lose his touch. “I started playing when I was very little. I used to carry around a small ukulele and just play it,” says Lucas. He then adds, “Then when I was about four, I got a small travel guitar and would just strum it. I grew up playing the guitar.” Lucas’s band “The Weathermen” plays at small clubs and lounges and attracts a modest crowd. The band is known for their energetic and exciting performances and is always a crowd pleaser. About being onstage, Lucas tells us, “It’s kind of nerve-racking at first. I personally get into a tired state right before going onstage. When I do get onstage, it’s kind of surreal.” Lucas makes the most of his talents and over the years, has become an excellent performer and musician.

Very few students play any other kind of instruments than stringed instruments at SHHS. That’s what makes Patrick Wong so unique and special. Being a flutist, Patrick plays with the jazz band, school orchestra, and recreationally. Patrick is one of the few freshmen musicians who play in the school orchestra, which gives his music an interesting and distinctive flare to it. The school orchestra is comprised of a fantastic group of students who love playing their instruments as well as showing off their talents in their exciting shows. Patrick tries to practice as much as he can to better himself and enjoys the feeling of playing music with others.

Multi-instrumentalist Kailen Santos loves to have fun and experiment with his instruments. Although seen regularly playing guitar or drums, Kailen is also an accomplished bass player. “[Music] gives me a creative outlet since I’m not the best at visual arts, and music has a wide range of categories in creativity”, says Kailen. He is extremely fond of playing music and always enjoys playing with others. Kailen constantly jams with whoever is around and over the years, has become a great tune writer. Being a self-proclaimed hipster, Kailen loves music by Two Door Cinema Club, Wavves, Best Coast, The Strokes, along with others. He is greatly influenced by indie bands, yet loves all kinds of music.

Music is a huge part of Stuart Hall’s community. Taking part in the jazz band, school orchestra, or just playing around are great ways for musicians to practice or simply have fun. Music brings our community together but also serves as a great way for Stuart Hall students to express themselves.