Fresh Start for the Jazz Band 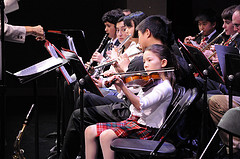 This year the Convent and Stuart Hall Coed Jazz Band is back and better than ever! With the graduation of some key musicians last year, the Jazz Band has been hard pressed to find new talent. But, they did just that. The size of the Jazz Band now compared to last year’s group is noticeably larger. There are multiple musicians for each instrument unlike last year, there was only one. This not only adds to the talent of the group, it also adds to the sound of the band as a whole. The more instruments that are playing, the richer the sound. And if there are multiples of the same instrument playing, the overall sound just gets better.

The Jazz Band performed its first Concert of the 2011-12 season on December 8th just in time for Christmas. It was held in the Syufy Theatre on the Broadway Campus. Many people attended the event, and where surprised at the level of skill with which the Jazz Band played. With hits from Duke Ellington and Herbie Hancock, the group’s playing was on time, in tune, and rockin’ out. There were quite a few spectacular solos from a select few of the performers as well. They played songs such as The Christmas Song, Caravan, and Coconut Island, and a crowd favorite, the Family Guy theme song, which is not an easy tune to play. Kailen Santos, a bass player in the Jazz Band said that, “The night was fantastic. Everything went perfectly, and I couldn’t be more happy with the way we played.” Also at the event were the Convent and Stuart Hall Elementary School’s Coed Jazz Band, which played songs such as Hounddog by Elvis Presley with a Christmas twist. Overall, the night was a success with many great moments in the line of the music played.

If the Christmas concert can be taken as a testament to the talent of the Jazz Band then we are in for an awesome year of performances! The Jazz Band continues to grow every year, and with the help of great musicians, it’s always playing better as well. The Four School community is excited to see what kind of new breath taking feats of music the Jazz Band can accomplish this year.