SOPA and the Internet Blackouts 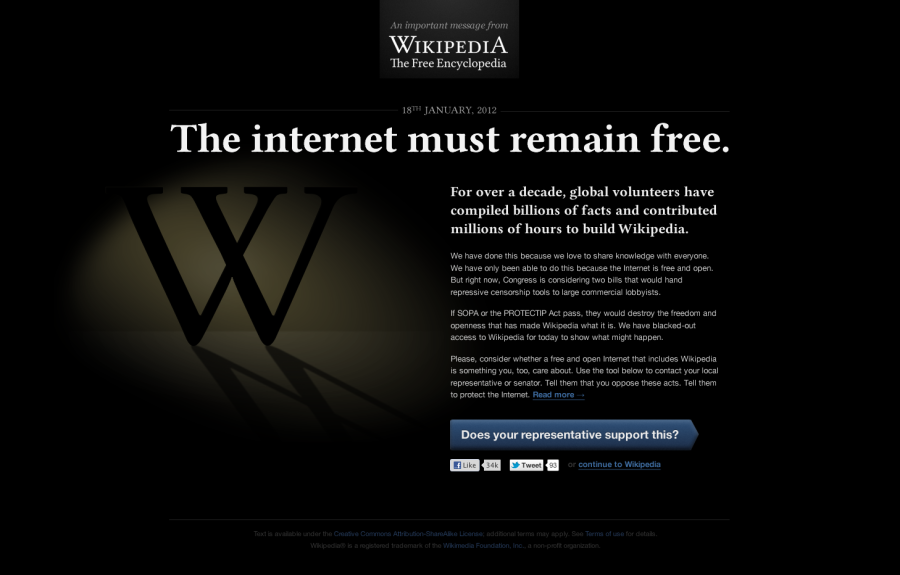 When it was brought to the attention of the Reddit link-sharing community in mid-November, SOPA, the Stop Online Piracy Act, drew immense criticism from all sectors of the internet, which might be the understatement of the year. A mass online movement to protest the bill was born, and legions of people contacted their Senators and Representatives to urge them to vote down the bill. SOPA will be discussed before Congress when it returns from its Winter Recess come the end of January.

In essence, the bill attempts to address the problem of media piracy by giving corporations more power to seek legal action against web sites they accuse of copyright infringement. Such legal actions might include blacklisting sites that link to shared copyrighted content, starving sites off the necessary advertising money they need to survive, imprisoning content-sharers for up to five years and barring search engines from displaying certain links.

The bill could be potentially destructive to high-schoolers, as the vast majority of produced content reuses borrowed content. Legal takedowns of background music in a slideshow could be taken to the next level as entire sites would have to be policed for infringing content. Senior Brandan La says, “I understand that companies should be able to protect their productions, but the fact that it limits a person’s amount of expression, especially if it requires a [reused] product, pushes it too far.”

Reflecting the “smart-mob” nature of the web, internet users revolted against the multitude of corporations that supported the bill. Namespace site GoDaddy, which voiced its support of the bill in December, faced a mass exodus of users as people boycotted the service. The company lost 37,000 users as a result of the boycott and saw its web ranking plunge when megasites Reddit and Wikipedia stopped using their domains.

On December 13th, Wikipedia founder Jimmy Wales proposed a Wikipedia “blackout” in protest of the bill, temporarily taking the site offline to send a penetrating message to legislators and the internet community. He addressed editors, “Do not underestimate our power – in my opinion, they are terrified of a public uprising about this, and we are uniquely positioned to start that”. As of January, Google, Facebook, Reddit and Twitter have put consideration into joining Wikipedia in its symbolic strike. Reddit and Wikipedia confirmed that simultaneous blackouts will be coordinated on January 18th.

Mainstream media has skirted the issue notably, while the tech industry has loudly and radically protested the measure. Time will tell whether this controversial measure will be the boon to innovation its creators espouse it to be.