Seniors Go to the Boardwalk 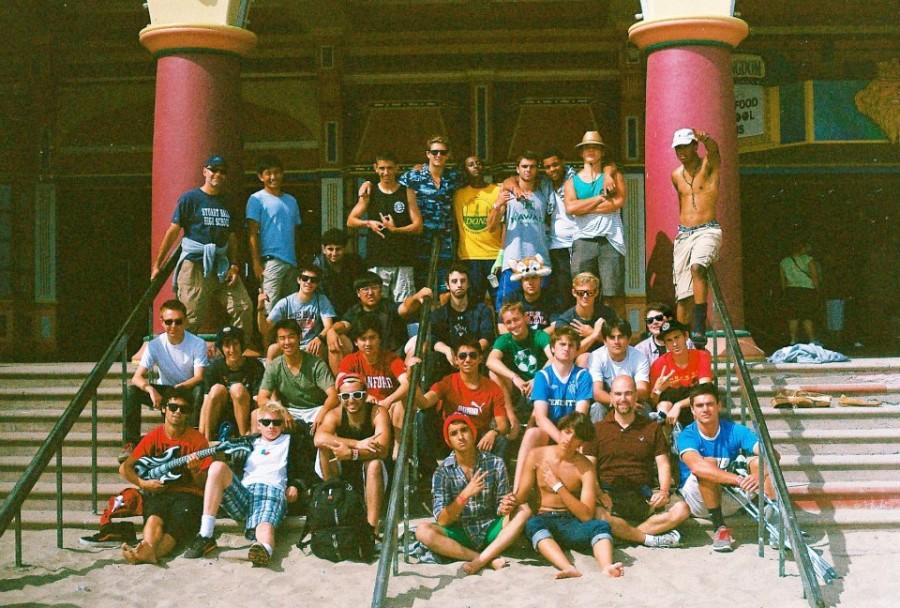 Seniors on the steps at the Santa Cruz Beach Boardwalk

Taking a break from college apps, school stress, and tons and tons of homework, the senior class went on a retreat to go water rafting, hiking, and enjoyed some fun in the sun at the Santa Cruz beach boardwalk.

I am not personally a thrill seeker but not much beats spending time with people you often only see in a classroom environment, flying down a river in an inflatable boat. Heck, even a few unlucky seniors tipped over. White water rafting was really the climax of the trip.

We started off the first day by driving to America’s White Water rafting a little bit out of Sacramento. After a long bus ride in which most of us slept, we got off a bus and were told to suit up in a lifejacket and helmet. After another long bus ride we were assigned guides and headed out on the river. It was hot, over 85 or 90 degrees. The water was freezing. But after a little bit we saw our boat mates not just as classmates, but as brothers. As we flew down the rapids we all worked in unison to make sure we didn’t get each other killed. And during the calm parts of the river we tackled each other into the freezing river. I’m pretty sure Mr. Campos got dunked over four times. But nothing beat the class three plus rapids, the boat flew downstream and contorted and bent to the water’s will. Serouge Panossian says, “the best experience was by far hitting that first rapid in the raft and being hit on all sides by the ice cold river water. It was really something that was once in a lifetime”. After a full day (about six hours) of rafting, worn out and tired, but closer than ever, we headed back to camp for dinner.

The next day we departed the campsite early to head to our next destination: hiking. We were put in a group randomly so most of us were in groups we don’t really know as our closest friends. We were assigned to take five pictures of our group in front of different items in nature. Most of this walk was spent conversing on random subjects and joking. We stopped midway through the hike to share a fact about each of ourselves that the others didn’t know, which provided many inside jokes later. Our group had the fortune of having an experienced boy scout, Devin Harvey, who took us on a “shortcut” up a rock face and onto an unknown road. For a good fifteen minutes we all assumed that we were completely lost until we returned to camp at least twenty minutes before everyone else.

After all of this the class headed to dinner in a restaurant in which we took up the entire back room of. It was amazing to see so many cram into two tables as we all talked and laughed and ran up a bill of about four hundred dollars (much to Mr. Roos’ dismay, who was in charge of calculating each persons tip and their charge for dinner.

We ventured on a late night bus ride to our hotel, most of us screaming or singing. Everet Tom and Joey Jweinat played “Gangnam Style” over five times at least and were dancing and singing along while the rest of the class rap battled in the back of the bus. Exhausted we crashed in the hotel room eager for the next day, the boardwalk.

The next day at The Santa Cruz Beach Boardwalk was the payoff, everyone ran around riding rides or enjoying the beach. Even the teachers went on a few rollercoasters. Did you know Mr. Roos is scared of amusement park rides? He claimed he was about to throw up on the first one!

Overall the senior trip was fantastic. But the activities really weren’t even the most bonding element. There’s really nothing more bonding than sitting on a bus for hours with your classmates. Even though the activities were great, the long bus rides really brought us together more than anything. Andrew Corral says, “I definitely feel like I bonded with my classmates. I think we bonded the most when we were just messing around on the bus rides to and from Santa Cruz because we just did a lot of talking”.

I feel like I certainly speak for the entire class when I say thank you Mr. O’Connor, Mr. Campos, and Mr. Roos for this awesome experience. It was great and I’m proud to be in the class of 2013.