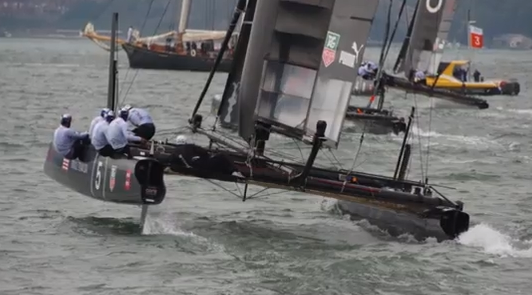 America races off the starting line | Photo Credit: Will Paulsen

Sailing in the Bay

The America’s cup, the largest and most popular yachting race in the world visited, San Francisco for six short days this summer. From August 21-August 26, 4-5 races took place a day, with boats from the U.S., Sweden, China, South Korea, France, Italy, New Zealand, France, Great Britain and Australia battling to the very last day of action for the most coveted prize on the yachting tour.

In the America’s cup regatta, there are two types of races. There are match races, which are simply one-on-one bouts between two boats and there are fleet races which are all out competitions in which every boat is competing. In the match races, the winner of the one-on-one matchup advances to the next round. Through the rounds of competition, the two American Oracle boats proved to the most formidable head to head opponents and found themselves facing off in the final. These two boats, skippered by Russell Coutts and James Spithill, clashed in an exciting race that saw the boat helmed by Coutts eventually winning the outright title. The second type of race, the fleet races, usually took place in the afternoon. In these intense contests every boat from the competition competed. Placing meant everything, with the final position of a boat being the basis for the amount of points that can be earned for a day of racing. For example, a first place finish will win a boat 12 points. A second place finish will earn 10 points. Third place wins nine and it continues that way down to 11th place which wins just one point. This system is used through the first six races, with the final day of racing having its own increased points system.  First place on the final day receives 40 points and second 25. This creates the possibility that the outcome of the event could completely change on the last day of racing. One team can be in complete control entering the final day of competition and then lose suddenly and tragically in the last few seconds of fighting for the title. And that is exactly what almost happened this year. Going into the last day, the Americans were in control. They were up by a significant amount of points to their next closest opponent and the title was there for the taking. But in the last dying minutes of racing, the Italian Piranha captured first place, with the Americans settling for second making the final score as close as it could be; the final points tally: Team USA 86, Italian Piranha boat 85, Team Korea 65.

According to our own Will Paulsen, the first leg of the 2012 chapter of the America’s cup in San Francisco was, “exciting and thrilling through the final day of competition because the boats were going at least 30 knots per hour on the water at all times and because the American Oracle boat was in control and eventually won; you were emotionally vested in the competition, rooting for your country’s boat the entire time. Our team was also right on the water. We were so close the entire time.”

The next leg of the tour continues in the San Francisco Bay from October 2-7 2012 and it will prove to be even more exciting than those memorable six days of racing in August. So come out alongside our own sailing team and enjoy days of thrilling racing and endless fun.