Sophomores and Face to Faith 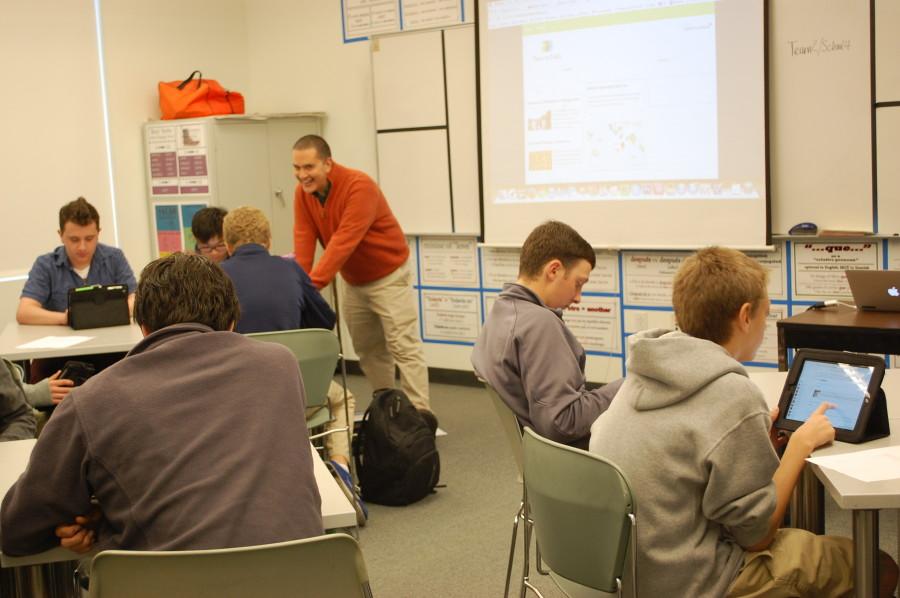 Sophomores working during Sacred Texts on a Face to Faith Activity. Photo by Lori Saltveit

Faith from a different perspective.
by Brandon Seltenrich ’16

In the beginning of October, all of the sophomores in Mr. Vasquez’s Sacred Texts class were introduced to a program started by the Tony Blair Faith Foundation called Face to Faith. In addition to offering students the opportunity to videoconference with one another, Face to Faith has a website in which students from all around the world can connect with each other through blog posts, comments, and messaging. It is designed with a Facebook-type layout that appeals to students and it offers many ways people can share their insight on faith with other students.

We started off our experience by reading blogs about identity and respect by students from schools in Kosovo, Italy, and the United Arab Emirates. Comments could be as simple as “I agree with you,” showing support to the values of students in different cultures. We then wrote our own blogs about how people could have dialogue about faith, and had students from their schools share their thoughts with us. Blog posts consisted of faith, inspiration and influences in our lives. William Rodriguez ‘16 and Kieran Nishio ’16 gave some feedback about their experiences in the Face to Faith program.

Did you see anything in the blogs written that really stuck out to you?
Kieran: Yeah, there were a few that were about respecting women, and I know in other countries it could be hard for women to be respected so it really stuck out to me that people were talking about this.
Will: Sort of, some of the stuff was pretty interesting. It was really most about respecting people, and people’s views on things. It was pretty cool, some things I didn’t agree with, some things I did. Overall it was pretty good.

Did you instant message any people on Face to Faith? If so, what did you discuss with them?
Kieran: Yeah, I talked to a girl from Italy and we talked about normal stuff; where we’re from and that kind of thing.
Will: I talked to one girl from India. She asked me about my sister, Indira. She found out that was my sister’s name in my profile information. I told her my mom named her after Indira Gandhi, and she thought that was very inspirational particularly due to her country’s history.

How do you think the Face to Faith experience has helped you?
Kieran: I really like that we got to connect with other people in the world. It was cool to talk to other people about what is important to them and how they are different and also share things in common with us?
Will: It didn’t really make much of a difference for me, because I already didn’t have weird thoughts about people around the world, I already thought like they thought and we have a lot of similar interests so it wasn’t anything new. But it was a pretty cool experience to be able to talk to a bunch of different people?

Face to Faith has been a great experience for students, giving them the chance to better understand cultures around the world and to interact with students of other faiths. I think it goes for all sophomores when I say that we would like to continue this program in the future and more activities in the years to come.