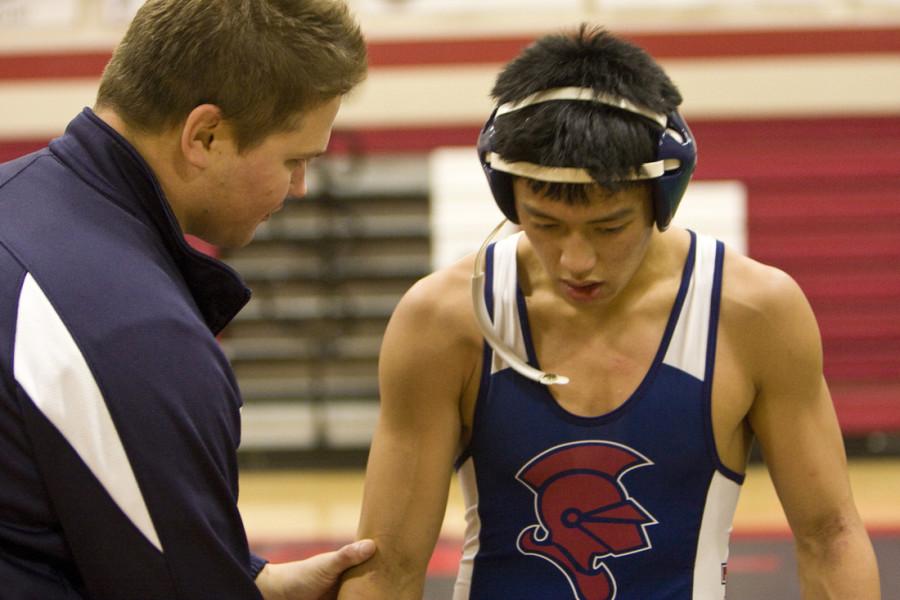 Olympians at the Hall

The Stuart Hall high school wrestling team was started in 2011 by Alex Asdourian. Coach Woodard has been with the team from the start, helping Alex and a group of students get the team off the ground. “A couple of guys wanted to start a club and I always wanted to start a program for the rest of the students who didn’t play basketball during the winter season.” said Coach Woodard. It is now a well developed team who are moving up the ranks. In the past year eight guys went to NCS and the team received third in the league. At NCS one of the eight players who went there was Austin Woo ‘15, “It was very difficult and there were many wrestlers there”.  Last year’s team was filled with seniors who were experienced wrestlers and left the team in great shape. This year’s team captains are Austin Woo ‘15 and Charlie O’Connell ‘15 who lead the new members of the team in the moves and strategies they need to succeed as strong wrestlers.

In a recent meet on January 9, Stuart Hall went against John Swett High School and Stuart Hall won, 58 to 6. The whole team went to this meet and all of the freshman won their matches, which is a great success for these new people on the team. “The team is growing and doing well. The newer members of the team are working very hard and are really trying to get better” said team captain, Charlie O’Connell. On Wednesday January 15, Stuart Hall went to the mat with the California School for the Deaf. It was a very close dual meet ending in a loss with a score of 38 to 34. This past Saturday, January 18, The Hall went to a tournament at Drake High School as a few of the Stuart Hall wrestlers placed.

It’s great to see how far the team has come, since Coach Woodward said, “The first year I had no experienced wrestlers and now I have returning upperclassmen, who are more experienced. Our team at tournaments were not considered a threat to other teams, but now our team is recognized by other teams as a tough team.” Our school can expect the team to win in the future and perfect their skills even more.