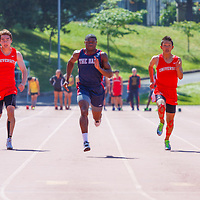 
With the winter sports season winding down, track season is right around the corner. With Mr. Buckley and Mr. Helms leading the Stuart Hall track team, the coaches hope to build on last year’s success. Unofficial practices have been going on throughout the last few months with winter conditioning, but the first official practice is Monday, February 9th with the first meet coming on March 6th.
If Stuart Hall Track and Field wants to live up to the expectations they set for themselves after last year, they have a tough test ahead of them. Last year, the Track and Field team was the BCL West, Bay Area Conference, and North Coast Section champions. Mr. Buckley is not worried however, and told the round table, “We had 15 all-league selections last year, only one of whom was a senior.” Mr. Buckley is confident that the track team can match and even do better than last year’s impressive achievements.
Track is a very individualized sport even though it is a team competition. Each individual competes in his or her own event. Those points are then tallied to the team total. The range of these events is wide, consisting of jumps, throws and different lengths of runs. This makes practice very difficult to organize because the events are both very technical and very different from one another. For example, the 100 meter dash requires bursts of speed, while the hurdles require that every single step of their race is choreographed beforehand.
The track team has a tough schedule this year with their meets starting on March 6th with the Sunset Invitational and their final meet on June 6th which is the CIF championship. Although the track team has some tough challenges ahead of them, they look to repeat their success of last year and be the best track team in San Francisco.
Delete Image
Align Left
Align Center
Align Right
Align Left
Align Center
Delete Heading