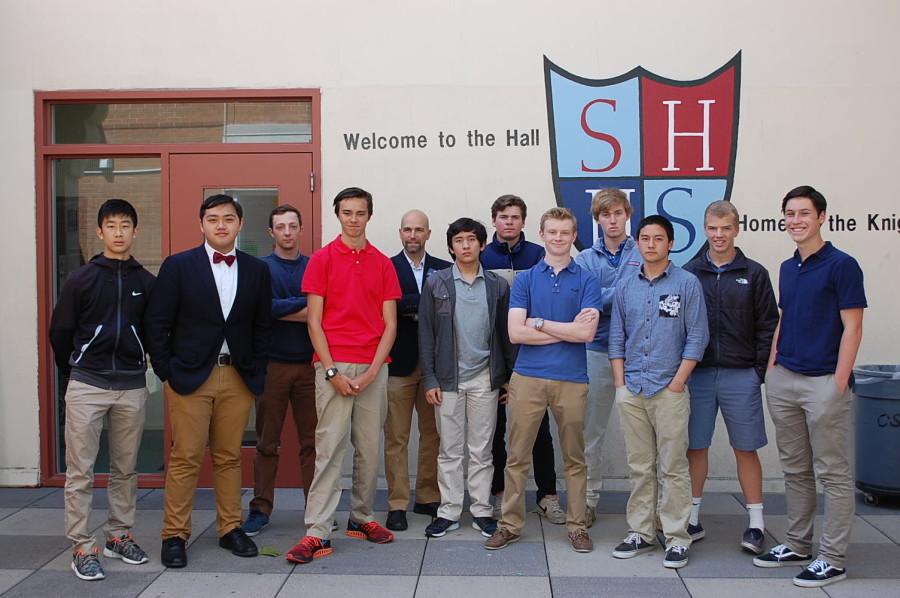 The new execs pose for a photo with Student Council Moderator, Mr. Roos.

As the 2014-2015 school year begins to come to a close, the seniors are ready to pass on former responsibilities.  Rising students stepped up to the podium on the morning of April 13th to proclaim their campaign for a director position.  The positions available were Activities Director, Director of Communications, Director of Finance, and of course, Student Body President and Vice President.

After morning announcements, the students gave speeches to the freshman, sophomore, and junior classes in order to demonstrate their leadership potential by laying out their goals for the future.  Three positions were won, unopposed: Student Body President and Vice President were won by Michael Tellini ‘17 and Alex Palmer ‘16, and the Director of Finance position was automatically won by Andrew Veld ‘16.  The Director of Communications and Activities Director races each contained two candidates, and after the vote, Duncan McDonnell ‘16 was elected Director of Communications, and Patrick Dilworth ‘17 won Activities Director.

On the following Monday, April 20th, the juniors, sophomores, and freshman split up into their respective classes to vote on their future class leaders. Each class voted on a president, vice president, four representatives, and two Honor Council members. The junior class voted on their senior Class President and VP, and Emiliano Bache and Dante LaCounte came out on top of the poll.  When the sophomore class voted on their leaders for next year, they chose Leon Tsai and Robert Eklund. The freshman chose Damian Fong and Nick Hom to be their class leaders.  The Honor Council representatives in each class are: juniors Andrew Veld and Zach Avila, sophomores Patrick Dilworth and Jack Merrigan, and freshman Nick Everest and Freddy Kiaie. Next year’s freshman class will decide on their class leaders next year during the first week of school.  Congratulations to the 2015-16 school year student leaders, and I wish them good luck in next year’s Student Council efforts to better our school.