The Hall Fires on all Cylinders 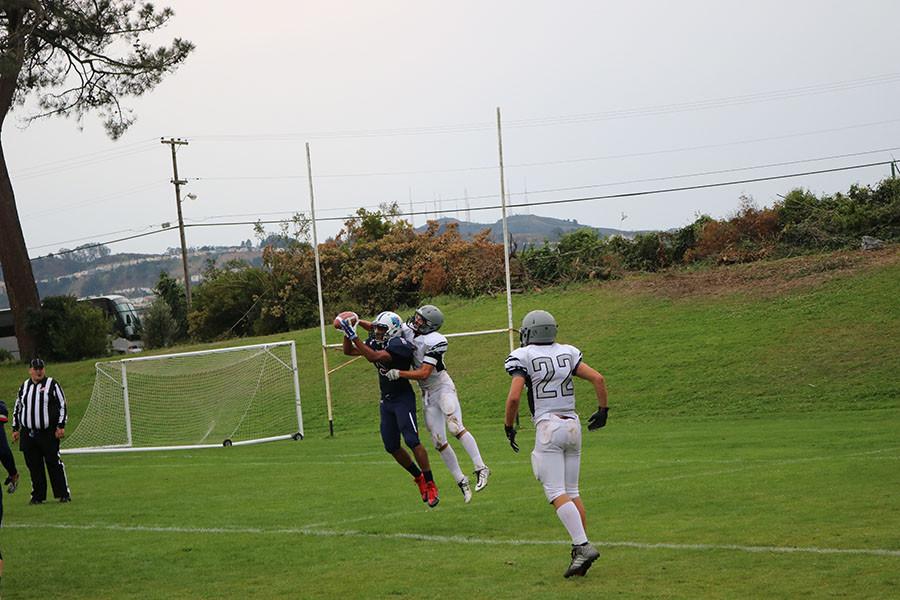 Malik Hale brings in a touchdown catch during a game earlier in the year.

One could say that The Hall football is having a successful season, they are 5-0 with two games left and have their sights set on a league championship and undefeated season. As Coach Richard Robinson said to the roundtable, “ At the beginning of the season we set two goals for ourselves, to be undefeated, and to win a league championship. So far, we are on our way to achieve both goals.” The Hall defeated Anzar 56-14 this past weekend.

The Hall was almost unstoppable on offense scoring on every offensive drive except for one. They scored on the second offensive play from scrimmage with a 35 yard touchdown pass from Jorim Powell ‘18 to tight end Rex Walters ‘17. The highlight play of the day was a 76 yard touchdown catch by wide receiver Chris Suarez ‘16 on a fourth down.

The defense was very solid throughout the game, forcing many three and outs, but had some lapses on long runs by Anzar. Although Anzar only passed the ball four times, The Hall batted down every single pass. Nick Watts ‘18 had 14 total tackles and linebackers Omid Ravanfar ‘16 and Alex MacDonald ‘17 had solid games, defending against the solid Anzar run attack.

The Hall’s three game streak of returning the opening second half kickoff for a touchdown ended, Malik Hale ‘16 did return his fourth kickoff for a touchdown. Stuart Hall was solid in kickoffs, not allowing a return for more than ten yards. Sam Cormier ‘18 had two special teams tackles extending his streak of having a special teams tackle in every single game. Alex Berbey ‘17 had a solid game at kicker with every kick having a good amount of hang time, allowing Stuart Hall to stymie the return game of Anzar.

The Hall is playing non-league power Anderson Valley, this Saturday, in the penultimate game of the season.