A Field Trip to the Future

Students head to Autodesk for a look at 3D-Printing 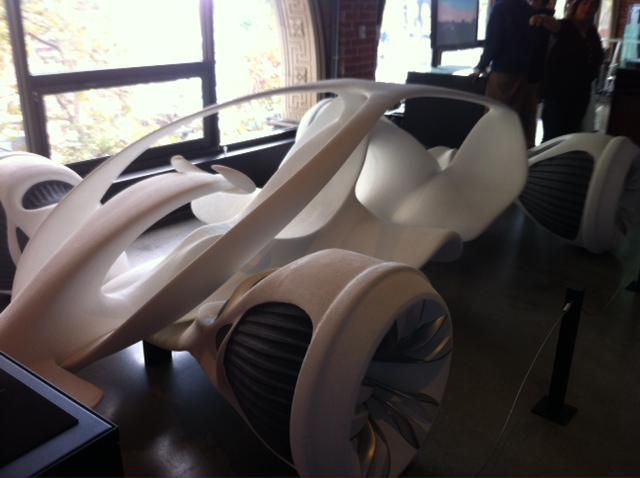 A variety of innovative designs can be found at Autodesk, including this 3D car.

For those who don’t know, Autodesk was founded in 1982 as an international software design company. On Thursday, October 15th, the sophomore Visual Arts classes went on a field trip to their San Francisco office at 1 Market Street #200.

The moment we entered their lobby, we were wowed by pieces of technology that their software created, including, but not limited to, a special wheelchair, a wearable dress made by a 3D printer, an airplane engine, and a robotic arm.

We were divided into tour groups and shown several projects that Autodesk had a hand in. My group was shown the work that had been done with their software by individual artists, then how city planners designed a bridge and parts of a city with Autodesk computer programs. Did you know that the new bridges connecting Crissy Field to the Golden Gate bridge area were designed by them? I sure didn’t. We even got to drive through the designs using a driving simulator they had on hand.

And speaking of cars, Autodesk has helped design futuristic vehicles for companies like Ferrari and Mercedes. The Mercedes car’s parts are even built from genetically-engineered plants growing bone like bio-degradable structures (that Autodesk’s genetic design software helped create, mind you).

Their accomplishments in digital design are not just limited to the real world, either. They boast an impressive resume of movie and TV special effects they have helped create. From James Cameron’s Avatar, to Breaking Bad and House Of Cards, their work in CGI (Computer Generated Images) design and implementation can be seen.

Their work doesn’t just benefit the super rich and their customers, however. Autodesk product and computer design has lead to the creation of technology like new prosthetic limbs, special baby carriers, and soccer balls that generate electricity while you play with them, all of which could benefit millions of people in developing countries. They even made a mobile TED Talk projector so they can pitch their ideas on the go.

But by far, the greatest monument to Autodesk stands in the middle of Shanghai, China. Shanghai Tower, the second tallest building in the world, was designed by engineering student not much older than you or I using Autodesk software and simulations to make sure everything was up to par.

Autodesk Software has offices all over the world, and stands as a shining example of technology conquering all, and I’m sure when Waynetech, Shield, Lexcorp, or Skynet need some new design software, they will call upon them. If you’re interested in digital design, or just cool technology in general go take a tour at the address provided above. You won’t regret it.