A Carousel Ride Down the Chart 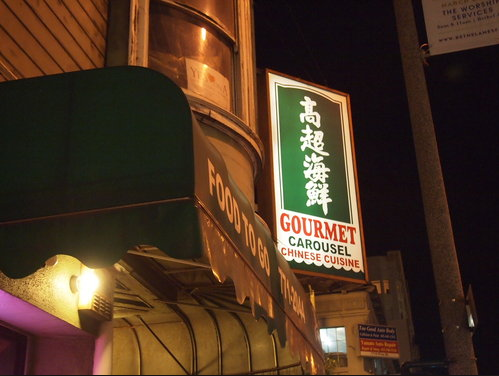 Gourmet Carousel turns out not to be so gourmet.

Gourmet Carousel is a Chinese restaurant on Franklin Street. Due to its location, it has become a favorite of students at Stuart Hall High School. Whether they get fried rice or noodles, or my personal favorite, Salt and Pepper Spare Ribs, it provides a cheap source for tasty food. Whether or not it is 100 % safe and clean, it was always good enough to satisfy a teenager’s taste buds. Even if it was rated 88 by the Department of Health, it would suffice. But in recent times, that dropped down to a less than fresh score of 67. To bring some context to that number, a 67 would be the grade of a D at our school. In this article, I am going to examine the score and the establishment as a whole. We will look at a student’s view on this situation and the input of an employee at Carousel so that this article is coming from an unbiased stance.

I wandered through the school wondering what other students felt about this. First, I asked sophomore, Nick Shkolnikov. I asked him if he was aware of the recent health rating. He responded by shaking his head. Afterwards, he went on to say: “I feel unsafe and I don’t think I’ll go there any time soon.” While this may be an overreaction, yet another sophomore, Jorim Powell, stated something similar. “It makes me confused why food like that could get a rating so low. What was I eating before?” A junior who has spent years going there, Ryan Murray, had this to say: “It isn’t like I went there every week, but I had gone a few times before. Knowing this, I don’t think I’ll be going again.”

After questioning students about what they thought, I decided to go down to Carousel, or as it is properly named: Gourmet Carousel. If you have ever gone to Carousel for lunch or called on the phone, you will recognize the woman at the front desk who quickly zips you your food, that is if you had ordered it far before the wide variety of students here had. Before interviewing her, I had to remind myself about how taste could beat health sometimes. I ordered a dish there, and for a second, forgot about how poor their ratings were. She eventually told me that when they were examined, they were already “overdue” for a check like this. For a while, they had been knowingly making food of an unknown condition. As this is not the best thing to see when you walk in, she told me that the staff was working very hard on bringing up that score. When asked about harm to business, she replied: “I still think that people will go.” A very bold answer, but it does beckon the question of where somebody who just needs a quick bite would go in an area like this.

It was very eye-opening, to examine everybody’s opinion on this situation. Some vehemently denied ever eating there in the future, while some shrugged it off, because it tasted too good. Whatever the case, I hope that people at least recognize and remember what is behind the bag, drowning in spilled soy sauce. A score not as savory as the spare ribs is probably something we should all keep in mind. I believe that I probably won’t be visiting this “gourmet” restaurant too often. Not only because of the score, but if you notice the prices, you might just jay-walk over to Walt’s truck. But I’m not perfect, I might fall victim to their Chow Mein or stir fry. I hope for their sakes, that they can achieve their goal. It would be a shame to see such a fine restaurant lose business.