The Awaited Sequel of a Classic

The “Force” Awakens the Film World 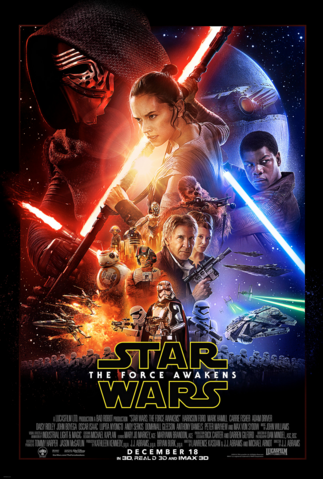 Star Wars: The Force Awakens came out last December and has already set countless records in film history. In its opening weekend, it garnered close to a quarter of a billion dollars! So far, in a short span of time, it is closing in on a box office total of $2 billion. The seventh installment of the Star Wars saga is proving to be the largest ever, and the film still hasn’t opened in China yet, one of the largest movie markets in the world.  Obviously, just by sheer curiosity, the film has peaked the interest of millions of people around the world and has received this unbelievable reception.

The film starts out in a bleak setting, approximately thirty years following the ending of Return of the Jedi. After Luke Skywalker and the Rebel Alliance helped overthrow the Galactic Empire in the last film, he disappears along with any symbol for long-lasting independence. A new faction, the First Order, that represents the “dark side” has ravaged what the Sith and Galactic Empire could not. The galaxy is left in disarray. But three new protagonists – Finn, Rey, and Poe – meet unexpectedly, which leads to their unanimous support toward the efforts of the Resistance. Throughout the film, Finn learns to combat the “dark side” he used to fight for. Poe escapes capture to assist in the efforts to destroy the Starkiller Base. Rey discovers something about herself that she hadn’t known – she has the abilities of a Jedi.

While this film definitely exceeded the mark set by the Star Wars prequel trilogy, the summary of the film didn’t exactly differ drastically from the premise of the original Star Wars film. With a film featuring characters from completely different walks of life, becoming friends, and aiding each other in the pursuit of a common goal – it seemed almost like a remake of the original, just with different actors. Mr. Halkyard was excited months in advance, but he seemed disappointed, “The new Star Wars film didn’t make me want to watch the next film.” Regardless of this observation though, it provided surprising twists. “I liked the action. I can’t wait for the next movie in 2017,” said Achilles Arnold ‘17. Harrison Ford, Carrie Fisher, and Mark Hamill reprise their roles as Han Solo, Princess Leia, and Luke Skywalker respectively. And spoiler alert, Han Solo died close to the end of the film, killed by the evil, Kylo Ren. This popular new antagonist actually turns out to be Solo’s son.

While the film didn’t present any new ideas, I think that it was an enjoyable experience. It’s rare that a whole theater cheers when a simple movie begins. The special effects were obviously stellar. The set design was rationally fantastic. The direction was good and the acting could possibly launch new careers for John Boyega and Daisy Ridley. It was entertaining and I would recommend the film to anyone who hasn’t seen it.