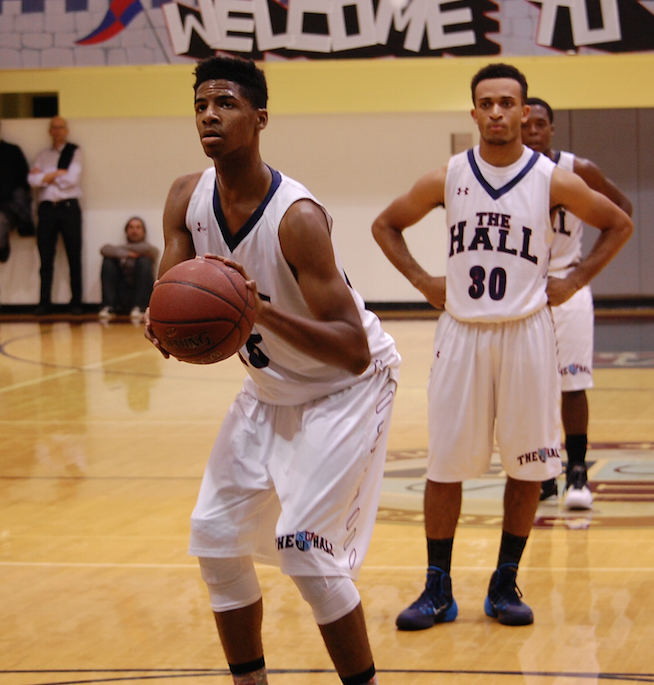 Zeke Crawford and his fellow senior leaders need to get the Varsity squad's chemistry together, if the season is to be salvaged.

The first part of the basketball season has just passed and it has not been a disappointment. After losing key players last year, Varsity has started the season 10-5 with JV going 13-2 and Frosh/Soph starting out 6-2. The Varsity team is led by seniors Zeke Crawford who is averaging 18.9 points per game and Axavier Byrd who is averaging 11.7 points per game. These two returners hope to lead the Knights to back-to-back league championships. The JV team started the year off 1-2, but are currently riding a 12 game win streak. Sophomore Andre Restauro wants to take this win streak into league and stated, “(The) season has been going great so far. We have had great team chemistry and hope to go undefeated in league.” Frosh/Soph has also started the season off to great start going 6-2. The team has been lead by coaches Richard Robinson and Noel Robinson who are also the coaches for our football team. Sophomore Mark Bickle really likes the coaches and I had a chance to catch up with him and hear what he had to say. “Our coaches push us to go farther and make us a much better team,” said Bickle ‘18. Hopefully the Knights can go into league and defend their championships at all levels.

The first league matchup is behind us and the Knights have started out a combined 2-1 with Frosh/Soph and JV winning and Varsity losing to University at home on Wednesday night. Frosh/Soph was lead by Skyler De La Cruz with 13 points and a great defensive effort by the whole team. At halftime, the Knights lead 33-17 and hoped to expand their lead. At the start of the third quarter University made a run which helped them get within single digits midway through the second half. The Knights then went on a run to expand the lead to 20 points and eventually win the game 56-38. The JV Knights beat University 63-51 and now are on the path to go undefeated in league. Tyler Makras ‘18 commented on the team’s key to success and he said, “The full court press has been working really well for us and forcing turnovers which leads to more possessions. Also, the bench has also been adding a lot of firepower which has helped us on our 12 game win streak.” Varsity rounded out the triple header by losing their first game, 63-47. Sophomore, Sean Ingoglia, played his first game after transferring from Bay School this year. Sean talked about his first game as a Knight and he said, “It was fun to be back in action, but unfortunately it ended in a loss for the team.” The team chemistry has been off and Varsity has now lost 5 out of their last 6 games with their only win being against Mills High School. I asked senior Axavier Byrd about how he thinks the team is doing and he responded, “The team is not playing great right now and there are a lot of internal things to work on in order for the team to get back on track.”

The Hall may only be one game into league play, but one thing is certain, they will be a fun team to watch this year.