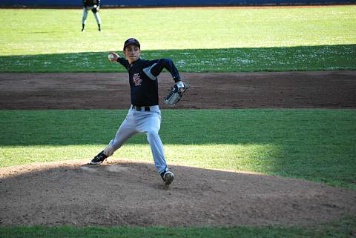 As the professional te

ams of Major League Baseball held Opening Day on April 4th, the Stuart Hall baseball team had theirs on February 25th.  With the departure of John Bertken as head coach, the Knights turned to former Minor League pitcher Eddie Russell to lead the team. Russell pitched for multiple Minor League teams affiliated with the Florida Marlins from 2001-2003, bringing much-welcomed professional experience to the table.

The Knights took the field against Bay on February 25th, as they clobbered their opponents 11-2. After two tough losses to Division 1 schools Lowell and Sacred Heart Cathedral, the Knights rebounded with wins against International High (2-0) and (the probable story of the year) against Leadership High (21-0). No, that’s not a typo, 21-0.

With Russell’s pitching credentials added to the team’s repertoires, the Knights’ starters have shown positive results. Freshman Ben Carasco dazzled Leadership with his arm, striking out eight of the nine batters he faced. On the other side of the board, Carasco went 3-3, with all three of his hits being triples. Senior Jordan Chavira  went 2-3 with a triple and 4 RBIs. The game was called off

after Carasco hit his third triple. Perhaps the main piece of evidence behind Coach Russell’s pitching ignition would be Frank Duncan’s performance on the mound. Duncan posted a two-hit shutout against International on March 18th. Apparently, this performance was not good enough, as Frank bettered that start with a sensational no-hitter against University on April 13th.

Senior Jordan Chavira acknowledged the improvements this season, saying, “Coach Russell has helped us win games by helping our pitching. Frank was awesome throwing that no hitter, and Ben Carasco is the future of Stuart Hall baseball. Seeing our pitching improve, our hitting has been much easier as well. Hopefully this will stay the same the rest of the year as we try to make a push to the playoffs.” The Knights are 6-7 mid-way through the season, already two shy of last year’s win total of eight. The Knights look to continue their positive play to finish the year and hopefully bounce into playoff contention, as they face big time division rivals in Marin Academy, Lick-Wilmerding, and Drew.