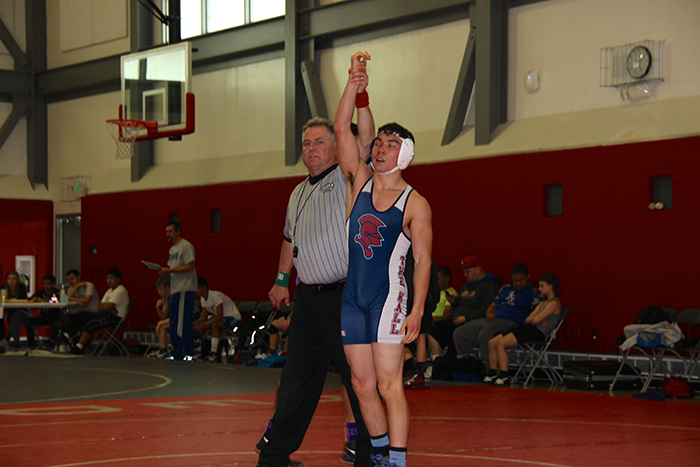 Alex McDonald '17 has turned some heads this year with his elite wrestling.

The wrestling season has come to an end with the North Coast Section tournament. Alex MacDonald ‘17 was the most successful in the tournament finishing 5th overall, the farthest a Stuart Hall wrestler has ever gone. Nine wrestlers from the Hall qualified for NCS and had to train for two extra weeks to be ready for the wrestling meet. At the tournament, Alex came in with a 22-6 record and was not seeded high in the bracket. During the tournament he had a very solid start by winning his first two matches and then he came up against Logan Potter from Livermore who was seeded 8th and had a 26-13 record. Alex was victorious in this match and then came to win one more before getting knocked out by Manavjot Singh from James Logan who was the 3rd seed and eventually went on to get 4th place at NCS. At the end of the tournament, Alex finished 5th with a 28-8 win breaking multiple Hall records. With this achievement, he will be ranked 5th at the start of the next season.

To get to where he is today, Alex really trained hard. Head Coach Matt Woodard talked about how, “Alex had skill from the start and really worked hard in the program while also maintaining a healthy diet.” Last year Alex went to a ten day intensive wrestling camp during the summer and this off season is going to be one of the most important times for him to get to the next level. Alex explains, “I am going to a three day camp in Oregon and will be going to the gym often.” Also on top of working out for wrestling, Alex also plays football and runs track. With all this off season training, hopefully he will be prepared to go on to states by achieving a top 3 spot in NCS next year. He is motivated to get there and hopes to achieve that in the upcoming wrestling season.