baseball hopes to right the ship after choppy seas 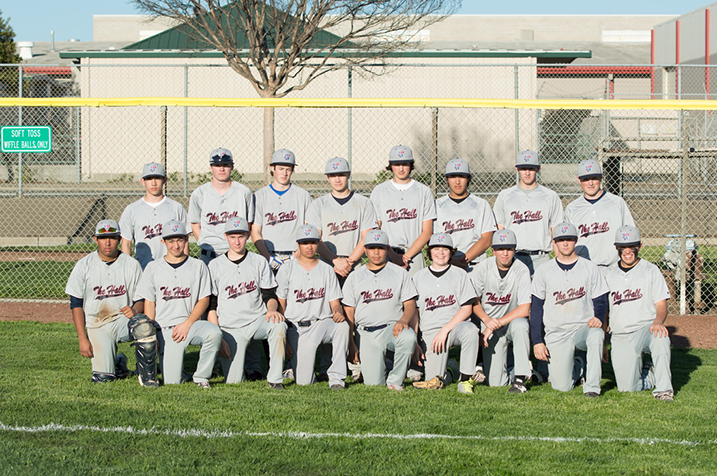 The baseball squad poses for a team photo after a game.

The Knights have gotten off to a shaky start this season. Sitting with a record of 4-4, they are below where they hoped to be after the first few games. The Knights’ home field, Treasure Island 3, which had gone through several changes over the offseason, did not look pretty at first glance. But after it hosted the Knights’ 10-0 win over the visiting Berean Christian Eagles, there were no complaints. The lights-out pitching performances from starting pitcher, Robbie Vanderlaan, and reliever, Alex Palmer, held the Eagles to only one hit over five innings. But when the team travelled to Danville to face off against BCL East division team, the Athenian Owls, they were not able to string together hits. Both teams exited the game with five hits apiece, but the Owls posted four runs to the Knights’ two. Somewhat of a spirit crusher, The Hall hoped to regain their stride against Sonoma Academy that Friday, as they had success against them the previous season. But as the rains blew in, the team had to bunker down and hold on to that bitter loss. The weather also cancelled their next game against BCL East division team, College Prep. Looking forward to their next game against Washington High School, Stuart Hall worked hard in the weight room and in the Dungeon to prepare themselves as best as they could. Their efforts paid off. After getting squashed last year, 11-3, the Knights showed up confident as ever. Willie Reader went to the mound firing bullets, not walking a single person and striking out eight. The game was a nail-biter this time around. Washington’s solo shot in the top of the fourth was quickly followed by a home run off the bat of Willie Reader in the bottom of the inning. After blows were traded again in the sixth, the game went into extra innings, tied at two. After a fumble on the infield, Washington was able to score a runner and go up 3-2 heading to the bottom of the eighth. But the Knights were not about to give up. Patient at the dish, batter after batter produced productive at bats. With the bases loaded, Alex Palmer stepped up to the plate and smashed a first pitch fastball down the left field line for a walk-off double. The 4-3 win tasted sweet in the mouths of the coaches and players, but the taste quickly faded the following day. Facing off against Redwood Christian, the Knights weren’t able to regain their footing after the Eagles posted two runs in the bottom of the second. An inability to score baserunners was the culprit of the 2-1 loss, as the Knights left 20 runners on base. It’s hard to tell whether or not this loss carried into their next game, but it seems that the Knights have not yet built themselves to their fullest potential. Facing Sacred Heart Cathedral in their only contest of the season, the Knights knew they had to start strong to be able to win the game. But after the Irish jumped to a 6-0 lead in the second, Stuart Hall couldn’t keep up. The game finished with a final score of 9-0, capping off a disappointing game. The Knights’ struggles could stem from numerous things, including injuries to senior Robbie Vanderlaan, junior Giggy Andrews, and sophomore Angel Padilla, but with junior pitcher Owen Hackel returning from basketball, there seems to be a new light for the team. Hackel had a great outing against Sacred Heart, coming in in relief, posting three zeros on the scoreboard. The submariner will be started against NCS Division Five champions, Branson.