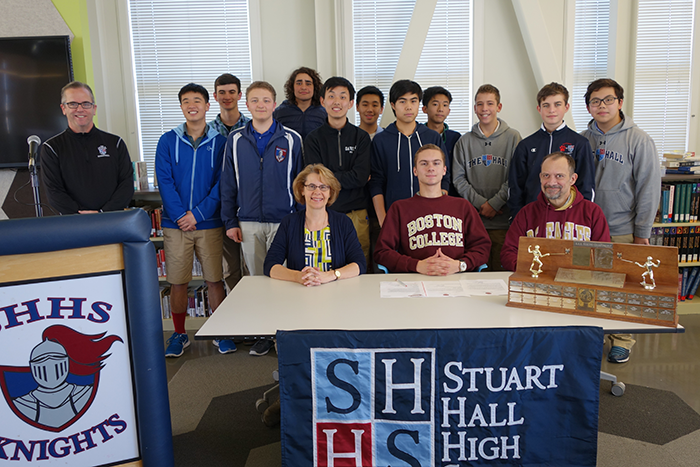 Students and family join Zack as he signs his letter of intent to attend Boston College.

Although it was much more fitting for fencer Zack Hammer ‘16 to be a Stuart Hall Knight, he will still fly high as a Boston College Eagle. Coming into his freshman year after being recruited by many schools, Zack is BC’s top foil recruit. As he reflects on the recruiting process he says, “Fencing also helped me get into a Division 1 college as well. Even with a strong academic record, getting into top colleges are incredibly difficult. It turns out, since fencing is sort of an elitist sport, that most of the top colleges have teams.” Zack is incredibly excited to compete at the college level, and in college his main goal is to compete in the NCAA championship and help elevate Boston College’s team to the best that it can be. After college Zack hopes to compete for the national championship and at the international level.

Even though Zack is now a superstar in the fencing world, he was not always a foiler. When Zack was little, his main sport was baseball, until one summer when that all changed. As he remembers, “I used to do little league baseball as my sport. One summer I had a few weeks where I had nothing to do, so my mom gave me a rec center pamphlet with a bunch of sports camps and told me to choose one. I chose fencing, because what kid wouldn’t love sword fighting? After that week I wanted to immediately quit baseball and do fencing full time. I’ve been doing it ever since.” Ever since he has started he has been a natural. He has travelled all over the U.S. and the world, and is really grateful for visiting all these places that he would not normally be able to go to. The Hall fencing team will look forward to having Zack for the rest of this year as he goes for his fourth consecutive city championship and teach the younger fencers some of his tricks.