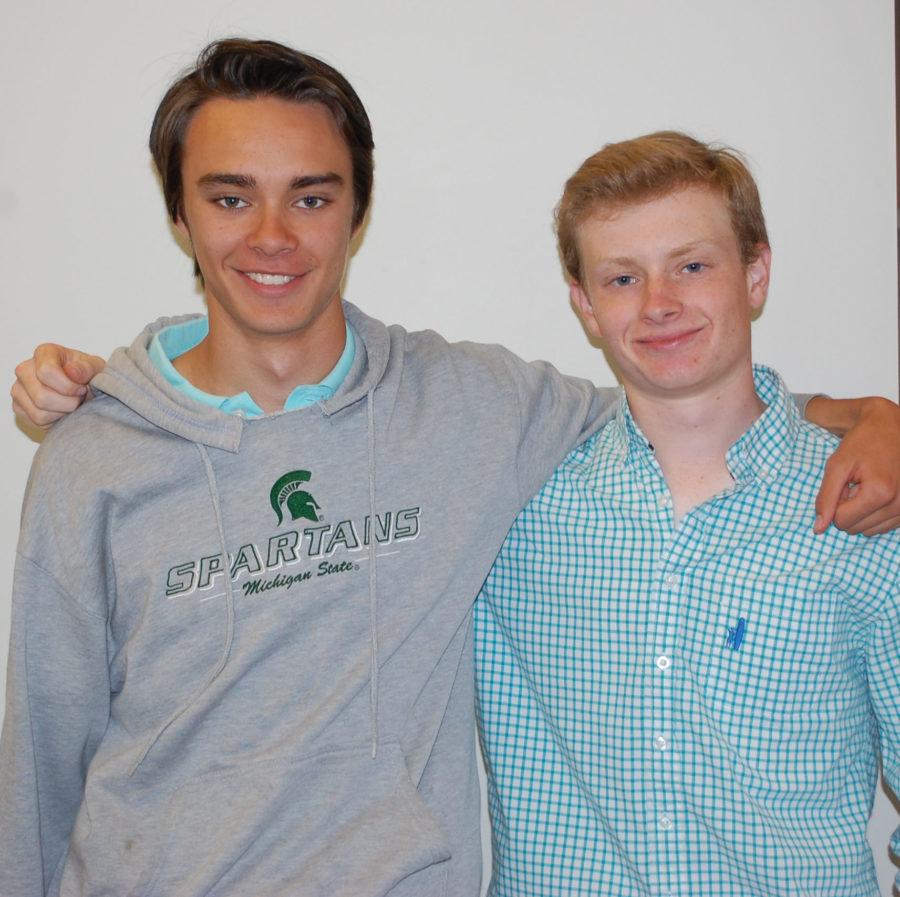 President, Michael Tellini, and Vice President, Patrick Dilworth, pose for a photo after winning the election.

Last Monday, the student body heard speeches from candidates for the offices of Finance, Operations,  Activities, and Student Body President and vice president. Except for the office of Student Body President and vice president, all races were unopposed. Calvin Foss ’17 ran for the Director of Finance. During his speech he talked of better managing the way student council spends the money, specifically relating to Congé. Calvin’s experience as a junior class representative this year will certainly be helpful in his endeavors next year. Leon Tsai ’17 ran for Director of Operations. His speech came with a surprise as he started it off with a loud yell. His speech was enjoyable and humorous, focusing on all of the “teas”  he hoped to bring to our school next year. “Communitea”,  “responsibilitea”, and a new “realitea” were all highlighted, and got a laugh from most listeners. Though Leon’s speech was very lighthearted, it touched on the points needed and had a clear message. Alex McDonald ’17 ran for Director of Activities and Publicities and presented a short and concise speech. Alex has plenty of experience dealing with scheduling and working on the fly. His experience will be very helpful when planning next year’s Congé, and he hopes to only keep improving from this year’s success.

After the departmental elections, Edward Emery ’17 and Nicholas Watts ’18 ran against incumbents Michael Tellini ’17 and Patrick Dilworth ’17. Emery led the ticket for president and Watts for vice president. Nick started the speeches, speaking at length about his goals for the next year. He kept the jokes to a minimum, and really showed maturity and readiness for the job. Emery followed with a moving speech where he physically got down on his knees to be “at the same level” as the student body. He talked of how initially he was scared to run, but decided to simply “go for it” and promised to give his all if elected. Patrick was up next, starting with a funny speech to set up his running mate, Michael. Michael’s speech had a bit of everything, and was very well spoken. He talked of how well he and his team had done this year, and set expectations high for his next term. Both presidential tickets spoke clearly and with poise. In the end, Michael and Patrick won with 80% of the vote. Overall, the elections were effective, with strong, hard working leaders being chosen in all fields.