The Hall brings it ‘home’ 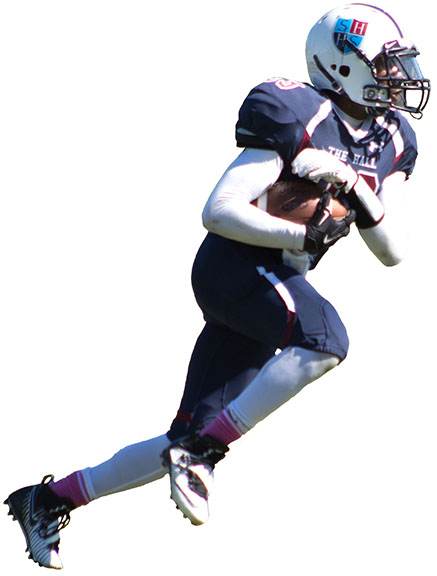 Jorim Powell ’18 rushes against Woodside Priory on Saturday at Boxer Stadium. Powell tallied four touchdowns on offense and recorded seven defensive tackles to help the Knights to a 50-26 victory.

By Sam Jubb and Owen Fahy

The Knights came out strong with a drubbing of Woodside Priory 50-26 at Convent & Stuart Hall’s  Homecoming game at Boxer Stadium on Saturday afternoon.

“We are getting better everyday and are looking forward to the rest of the season,” receiver Ryan Darwin said. “We practice everyday working on position play, scrimmages and  conditioning.”

Coach Joe Latchinson emphasizes the importance of playing as a team and as one unit on the field. He is trying to not only  build them as players but as students and as young men.

“Unity. Faith in each other,” Latchinson said. “If you have each other’s back in each game, it defeats all opposition. I get ’em mentally focused, keep ’em on task, on their assignment. And I tell ’em to have fun while doing it.”

Although the game started at 2 p.m., the festivities kicked off at 11:30 a.m. with the Boneyard, a food truck owned by SHHS parents, serving up hamburgers and hotdogs as well as pulled pork sandwiches, leading the tailgate.

Students were encouraged to wear Homecoming shirts that were sold by Student Council throughout the week leading up to the game.

The student body participated in a game of tug-of-war as halftime entertainment.

“It was a fun thing to be a part of,” Will Kahn ’18 said. “It was an entertaining event for anyone who was not involved.”