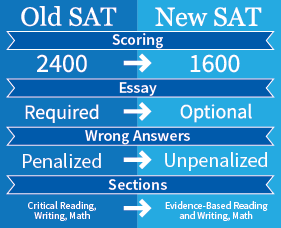 When college-bound students took the Standardized Aptitude Test on Oct. 1, it was quite different from what their parents and older friends have described. The College Board issued a new version in March with new scoring and answer systems, optional essays and redesigned sections.

“It’s more what you’re learning in school,” Academic Support Director Cindy Gonzalez-Yoakum said. “I think they’re taking out the mystery and trickery of the SAT — not to say that it’s easier.”

The new test focuses more on reading, analyzing and writing, which are more practical applications of knowledge, according to the College Board. Students are more likely to be familiar with tested vocabulary, although they will have to know multiple definitions of the words, and sentence completions have been removed.

Analysis section excerpts are from texts students are more likely to have read such as novels or political documents.

The redesigned math segment also forces students to apply their skills to actual situations, instead of just solving arbitrary and purely numerical problems.

“The old math was a lot harder and was textbook math,” Lachlan McBride ’17, who has taken the new exam, said. “The new one is easier and has more real-world problems.”

The changes should meet the changing world and deal with slipping student scores, according to the College Board. The new questions are be more complicated, but also more relevant to real life and a student’s future.

“Every generation of test takers for the SAT has some feeling or some criticism,” College Counseling Director Cesar Guerrero said. “Some people think that the SAT wasn’t able to predict success in college, but what exam is?”