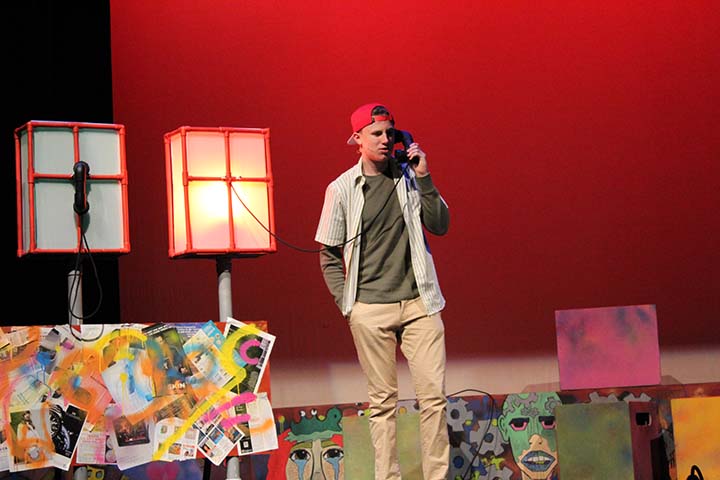 John Abbott ’18 rehearses a scene in the Syufy Theatre on Monday. “Sixteen in 10 Minutes or Less” is a series of short plays focusing on being a 16 year old.

When this year’s fall production of “Sixteen in 10 Minutes or Less” opens tonight, the cast will present audience members with an original performance, as “Sixteen” incorporates a collection of scenes which are short plays themselves, some of which are written by the cast members.

“This year’s play is special because it feels like it’s not a traditional play,” actor Robert Santos ’17 said. “It’s not just one character being focused on, so it gives everyone the spotlight at least once.”

The play is a collection of 13 plays about the lives of 16 year olds. Although playwright Bradley Hayward wrote the play in 2011, cast members decided some of the original scripts were no longer relevant or did not accurately reflect the lives of 16 year olds, and wrote their own scenes. The play also features an original song written and performed by Sophie Egan ’19.

Some cast members say that because they wrote the scenes themselves, the scenes are more personal.

“It’s challenging for the cast, as many of the characters are affected by real life situations that we have all experienced,” Nicholas Camminante ’18 said.

The play tackles many aspects of what it means to be a teenager, from insecurities to online activity to bullying. The play takes on a humorous approach, which helps balance out some of the dark undertones.

“Sixteen in 10 Minutes or Less” opens tonight in the Syufy Theatre at 7 p.m., with two more showings throughout the weekend. Tickets are $10
at the door.

“It’s my last year and I want to go out with a bang,” Santos said.