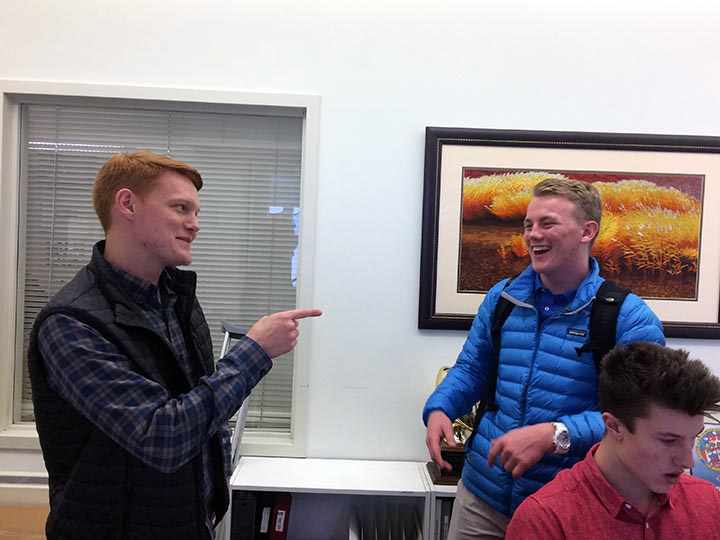 With a handful of new teachers and staff joining the school community this year, a familiar face for many faculty and staff members has returned.

“Every morning when I come in he’s joking around with me,” Jonathan Newsome ’19 said. “He’s just a fun guy to have around. Overall, he’s very easy to relate to because he is a young adult. He shares a similar perspective as kids like me, given that we like sports and share common interests.”

Quetone came to California as a teen, moving away from most of his family to attend Stuart Hall.

“I was born and raised in Minnesota, and I moved here for high school,” Quetone said. “Mr. Khan was my brother-in-law. He was working here and he told me that there was a spot here to go to school. I thought it would be a really cool opportunity to go to high school in California and take a chance to see how it would go.”

Shuja Khan continues to be the school’s admissions director.

“At first it was hard but I had a couple of siblings around here,” Quetone said, “but it was definitely a different experience to completely uproot and move to the West Coast away from my family.”

After graduation Quetone attended Marquette University in Milwaukee, Wisconsin, where he earned a bachelor’s degree in science for business and administration.

After college he interned at Children’s Hospital in Wisconsin, then he travelled around the United States, visiting family and friends before he got an invitation to come back to San Francisco.

“I got a call about working here, and I pulled the trigger,” Quetone said. “As soon as I moved here I knew I wanted to end up here. After I graduated from Marquette I knew it was my main goal to come back to SF.”

Quetone is not only popular with students and teachers, but he is also well liked by the coaching staff.

Johnson also coached Quetone in basketball while he was a student athlete.

“It’s nice to see kids come back after their college careers,” Johnson said It’s great to see how they’ve turned into nice men, and Tal is a prime example of that.” Johnson said.

While faculty members are experiencing Quetone becoming a colleague, Quetone says it hasn’t been hard to start treating former teachers as equals.

“It was weird at first, but it wasn’t hard,” Quetone said. “Ultimately the teachers have done a great job at switching from treating me like a student to a colleague.”

Quetone is still unsure about his future career plans.

“I didn’t go to school for educating, so my main focus moving forward I don’t see being teaching,” Quetone said. “But I’m not ruling it out because of the background I come from. My dad was a teacher and so were multiple siblings.”