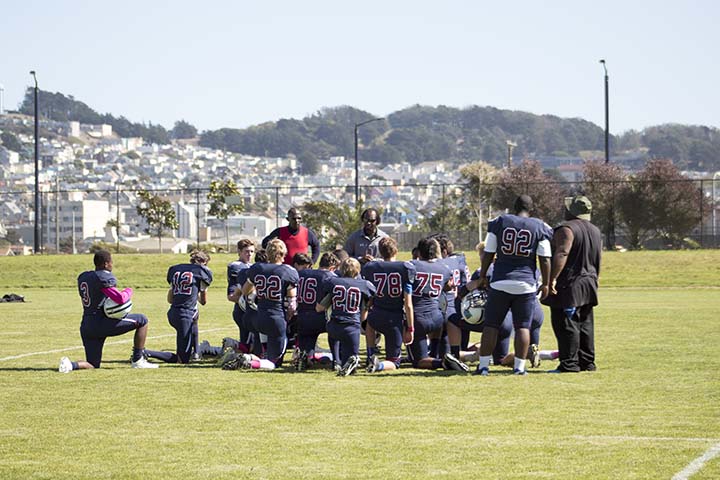 The Knights football team huddles up prior to the Homecoming game on Oct. 1. The Knights won its second straight league championship this season after finshing 5-0 in league play and 5-2 overall. Stuart Hall conceded the least amount of points in its league, and are looking to return many junior defensemen for a run at a third straight championship next year.

The Knights capped off its season by winning the Mission Trail Athletic League championship on October 29 with a win against East Palo Alto, lead by the league’s most valuable player and a senior captain who was the league’s leading tackler.

The Knights claimed the MTAL championship with a 60-6 win against East Palo Alto Phoenix Academy, on Oct. 29, marking its second championship in a row, and a perfect league record over the last two seasons, with two consecutive undefeated league seasons.

“Any time you have back-to-back league championships in any sport, it’s special,” athletic director Charlie Johnson said. “I couldn’t be happier for the coaching staff and the players.”

Powell said he was happy with the overall outcome of the season.

“We started off shaky, but as as the season went on we became more of a team and became closer,” Powell said.

Powell lead the team running the ball, posting 973 rushing yards, including a 14.3 yards per carry, to go along with 12 touchdowns. With his performance this year, Powell won the league MVP award.

“It would mean that the hard work that I’ve been putting in on the weekends outside of practice has really been paying off,” said Powell, in an interview before the announcement of the league MVP. “I’d be really happy about winning the award.”

Jeremiah Sullivan ’17 led the league in receiving yards with 658 to go along with nine touchdowns.

On defense, Alex McDonald ’17 lead the league with 72 total tackles. Sam Cormier ’18 and Nick Watts ’18 both lead the MTAL with 11.5 sacks on the season. Powell and Alex Byrd ’19 had five and three interceptions, respectively good for the most and second most total interceptions in the league. The defense finished the year with a league low 76 points allowed.

McDonald, a team captain, credits the team’s achievement to trust.

“Going into this year, our defense looked sparse and limited for the year, but after a few weeks the defense grew tremendously to the point where I had no issues trusting anyone on this team,” McDonald said. “We trusted each other, and with that trust comes championships.”