Horwitz runs away from competition 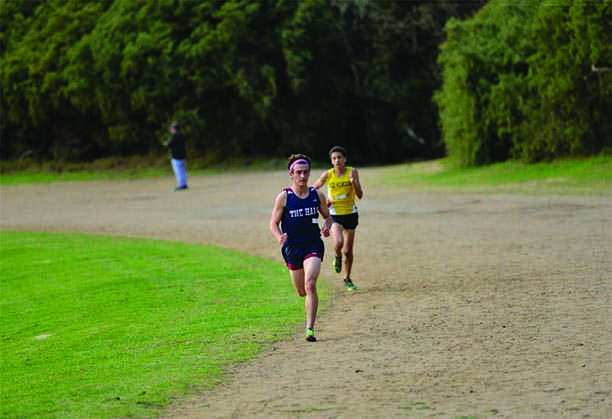 By Nick Everest and Christopher Cohen

After an undefeated season of cross-country in the competitive Bay Counties League West, Eli Horwitz ’17 is setting his sights on his final season of track and field in the spring.

“Going undefeated was amazing because I never thought it would be within my capabilities to accomplish something like that,” Horwitz said. “I used to really look up to guys like Thomas Namarra and it’s flabbergasting that I’ve been able to accomplish all of the things he has and so much more.”

Originally a varsity soccer player and sprinter for the track and field team, Horwitz made the switch to cross-country and long distance running at the start of his junior year. With this alteration, he quickly became one of the strongest runners in the Bay Area.

“I have goals and aspirations in the future that as an athlete I still can’t believe I would ever be able to reach,” Horwitz said.

Currently holding the school record in the boy’s 800-meter, 1600 and 3200 races for track and field, Horwitz joins the ranks of Stuart Hall 2015 alumni and current college athletes Bosco Bapoupeleh and Drew Xandrine-Anderson. Horwitz is preparing to compete at a higher level, and has interest from Division I colleges around the country.

“I do hope to run in college, which is incredible for me because I never would have thought I would be able to compete Division I in any sport,” Horwitz said. “In college I want to break four minutes on my mile time. It’s a big bench mark that every miler hopes to accomplish.”

As the cross-country season ends and the winter begins, Horwitz is training for track and field in the spring. Last year’s team won the league title, but fell short in North Coast Section. Horwitz says he believes this year’s team is the favorite for the title, hoping the team will hold itself to a high standard, aiming to win. He hopes his all-senior 4×4 team sets a school record this coming season.

“Personally I want to make the state meet this year,” Horwitz said. “In the past I’ve run times that would have won the state meet in other states, but I failed to reach the California meet.”