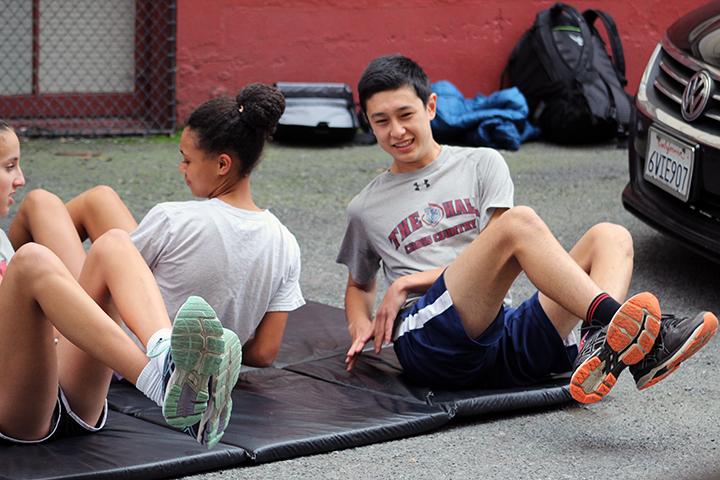 Athletes are utilizing new equipment in the weight room during informal winter conditioning to stay in shape and prepare for spring sports.
“It is an open program and is relatively unstructured,” track coach Michael Buckley said. “Everybody is welcome. I’m there every day, but usually, other faculty and coaches are there, too. It’s a pretty mixed group, consisting mostly of track coaches.”
The weight room’s primary service is to help students get fit for spring sports and occasionally to blow off some steam after school, according to Buckley.
Track and field requires particular types of exercises that focus on the different muscle groups that are relevant to the various events.
“A sprinter needs to be strong in every muscle aspect,” Buckley said. “Winter conditioning is a good opportunity to develop muscle mass and bulk up a little bit. The goal is to maximize the strength of muscles our athletes already have.”
The after-school workouts provide beneficial exercises for strength training and a variety of other forms of activity.
“Winter conditioning gets you ready for the consistency of running,” Rainier De la Cruz ’20 said. “I’m mainly getting back into the feeling of long-distance running.”
Pre-season workouts increase an individual’s training regimen, which contributes to his performance during sporting events.
“Without winter training, I would’ve been sore after my regular running workout since coming from cross-country a while ago,” Dela Cruz said. “I got used to the soreness when running during training, which will hopefully boost my stamina during the springtime.”
Winter conditioning can also allow athletes to increase their endurance, one of the necessities for long-distance running.
“For track, I do long-distance, specifically the 3200-meter, which requires a lot of stamina,” Travis Evans ’19 said. “I’ve mainly been focusing on core. It’s important to have a strong core for the transfer of energy as you run.”
During summer vacation, new equipment was added to the weight room.
“We wanted to make the facility better,” Buckley said. “We removed old equipment and put in four new squat cages. It focuses on the muscles in your hips. The stronger your hips, the more force you apply to the ground as you run.”
The new equipment should protect athletes from accidents when using the apparatuses and add to safety.
“The squat cages now protect you during a heavy squat,” Buckley said. “Before, you would be standing in the open. If you drop the bar, it gets caught by the cage made of metal bars instead of landing on someone’s feet.”
Aside from the physical conditioning, coaches are emphasizing nutrition as an important component of off-season training.
“The amount of exercise you’re doing depends on the number of calories you’re burning,” track coach Scott Roos said.” You need to eat more carbs, protein and fiber and less junk food. Eating a little amount of sugar allows your body to digest those foods naturally.”
Athletes are advised to avoid eating before conditioning to augment their training sessions.
“You shouldn’t eat right before a workout, but after a workout, you should have carbs and protein,” Roos said. “Carbs replace glycogen, and protein tells your body that it’s OK to build muscle again.”
Athletes are also encouraged to train outside of the weight room.
“They need to get some running in, depending on the distance, they need a baseline level of fitness,” Buckley said.
A mindful use of a workout can maximize a training session.
“You need to be warmed up before a workout, but research shows that the most important time to stretch is after a workout,” Roos said. “Don’t dilly-dally during a training session,” Roos said. “You should stay concentrated on your exercises.”