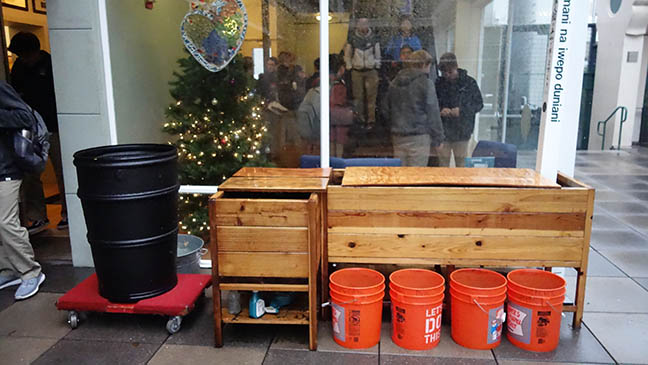 The barrel sits outside the lobby in the Courtyard of the Pine and Octavia campus. It was placed due to January's strong rains causing the rain gutters to overflow.

By Nicholas Hom and Eric Mai

The 4-foot-tall, black, plastic barrel sitting on a pallet outside the front lobby of the Pine and Octavia campus collecting water throughout this week’s rainy weather isn’t just for preventing puddles from accumulating.

The barrel is the newest solution to water dripping off of the Stuart Hall High School building, following a long line of paint buckets which failed to hold water seeping through the rain gutter. The 50-gallon barrel is collecting water for plants in the Courtyard, according to Service Learning Director Raymond O’Connor.

“It is pretty cool that the problem not only has a solution, but a solution that helps during our drought.” William Kahn ʼ18 said.

Drought conditions have lessened in the northwestern regions of California, including the Bay Area, due to the recent precipitation, but conditions are still in an emergency state in Southern California, according to the California Drought Monitor.

“California is never really out of drought no matter how much rain we may receive in any given season,” O’Connor said. “We know that there can be years of little precipitation. The nice thing about this is that the San Francisco Public Utilities Commission offers rebates on barrels up to 50 percent.”

The barrel could be the root for new water-collecting systems. The next step is to purchase a 450-gallon barrel to place under the Morning Star roof.