Knights prepare to take on University

JV and Varsity can clinch league championships with wins 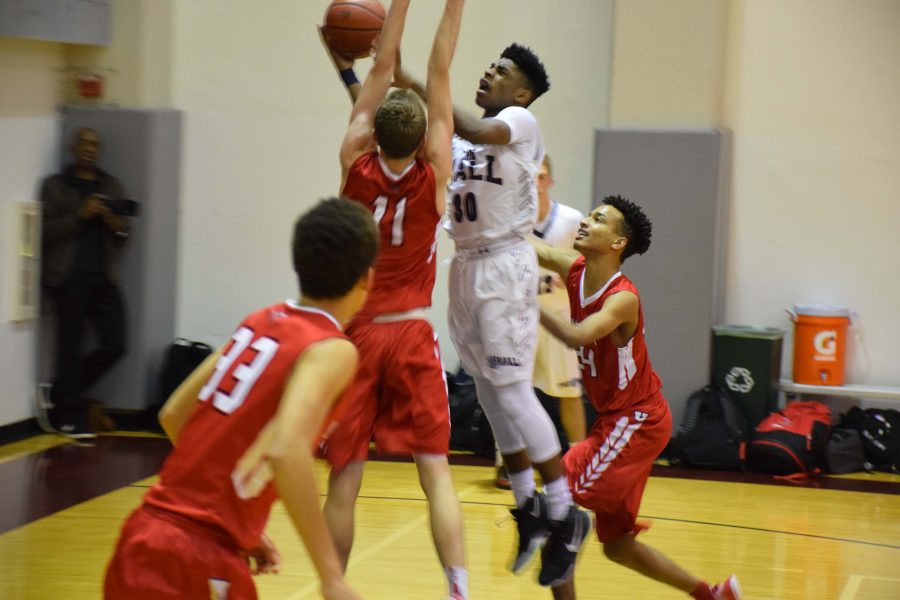 Miles Amos '19 drives to the rim for two of his 27 points in the game against University on Jan.24. Varsity and JV take on UHS again tonight.

In the most recent games between The Hall and University, Stuart Hall came out on top, making the Knights the favorites walking into tonight’s matchup.

“We know it’s going to be tough to go into their house and get a win,”  role player Spencer O’Brien Steele ’19 said. “We feel like if we do what we did last game, take away the three and make them attack the hoop, we have a great chance at winning.”

Although The Hall might be the better team on paper, University’s home court advantage remains a constant unknown variable that could alter the outcome of the game. University’s gym is known for the intense and hostile atmosphere fostered by the loud, raucous fans that are a trademark of the compact facility.

JV has been gearing up during the past week in preparation for their final game of the season that is scheduled for tip-off at 5:30.

“The guys are excited for a great league matchup tonight in a hostile environment,” JV energy player Eli Mundy ’19 said. “We’re looking for a big game from our scorers and for everyone else to play their role.”

After a huge win on the back of Miles Amos’s ’19 27 points in the Jan. 24 meeting, varsity has shown it is able to handle University and remains confident about its chances at tonight’s 7:00 game.

“We’re well prepared to play them,” starter Jaden Newman ’17 said. “Even on their home court.”