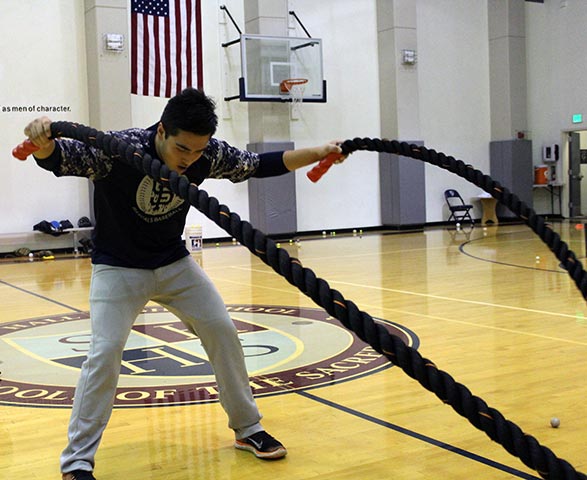 Achilles Arnold ’17 works out during baseball practice in The Dungeon. The baseball team was forced to hold their first week of practice indoors as a result of the weather.

The baseball team began practice under a new coach on Feb. 6, and is looking to win another league title after finishing third in the North Coast Section against St. Joseph Notre Dame High School in extra innings during the 2016 playoffs.

New head coach Brian Ceinar will lead the team as Coach Joey Railey has left for Redwood City in order to care for his newborn daughter, according to Athletic Director Charlie Johnson.

“We have won the league championship six years in a row,” Johnson said. “I expect us to have a solid year with Brian Ceinar, the new coach.”

The team is practicing on Monday through Saturday, rain or shine, according to Coach Brian, as offseason training helps athletes focus on their weak points, giving them an edge during games.

“I decided to take the fall off from football so I can focus on baseball because this upcoming junior season would likely be my most important one yet,” catcher William Khan ’18 said. “I’ve been lifting or doing some sort of baseball activity each day like hitting, throwing, or catcher drills.”

Khan has been training as a means of pursuing his collegiate baseball career.

“Somewhere out there, I know a kid is trying to compete for the same spot I am,” Khan said. “I want to make sure I can do everything in my power to earn it.”

Some players have expressed concerns about getting limited amounts of playing time due to there being more than 20 players on the team.

“I’m willing to sit out games knowing that I probably will not start,” Jack Pirrone ’20 said. “I just wish that we can have smaller teams for more playing time.”

Along with basic practice routines, coaches emphasize finding flaws in mechanics and working to fix them.

“I worked with the current Sacramento River Cats bullpen catcher and University of San Francisco alumni, Travis Higgs,” Khan said. “We worked on throwing footwork and throwing consistency because if I am constantly throwing the ball well and accurately, I will not have to worry about it in a game.”

Support and unification will lead to the team’s success, according to Khan.

“I want to make sure every player feels like they are doing something to help the team win whether they play in a game or not.” Khan said. “We can do a lot more together rather than a few players trying to win every game for the team.”

The Knights first game is scheduled to be played away on Wednesday, Feb. 22 at Valley Christian Schools at 3:30 p.m.