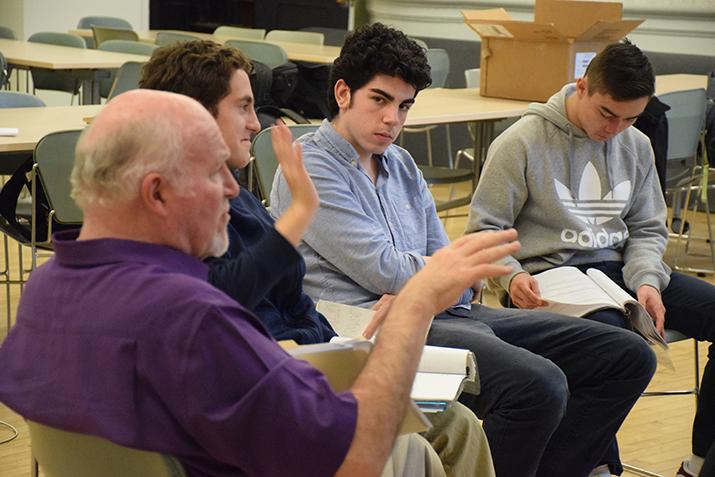 Nicholas Camminante ’18 and Seth Eislund ’18 listen to Norm Luna give stage directions at rehearsal on Monday. The class meets during H periods every week to work on their performance.

Acting Lab director Norm Luna and his students are working to bring the Sherlock Holmes adventure “The Hound of the Baskervilles” to the Columbus Room stage in April.

“Although most students are familiar with the characters Sherlock Holmes and Dr. Watson in some form, the students will experience how a mystery unfolds, and who, at the end of the play, is the culprit,” Luna said.

“The Hound of the Baskervilles” is the third Sherlock Holmes novel written by Sir Arthur Conan Doyle and originally was featured as a magazine serial in 1901-02. The plot follows Holmes’ and Watson’s investigation of a series of crimes in Northern England, supposedly involving a supernatural canine.

Despite its somewhat frightening origins involving monstrous dogs and murders, Stuart Hall’s adaptation of the Holmes story is said to have a lighter tone than previous performances.

“In ‘One Flew Over The Cuckoo’s Nest,’ maybe some scenes were too heavy,” Nicholas Camminante ’18 said. “This one is more of a comedic play. Sure, there are things like the death of characters that some people might find scary or sad, but in general it will be more funny.”

While last year’s school adaptation of Ken Kesey’s “One Flew Over The Cuckoo’s Nest” had a single actor play two characters that talked to each other — which confused some viewers, as the story is set in a mental asylum — this year has taken non-traditional casting a step further.

“Every scene there’s a new actor for each role — it’s working well for us so far,” John Abbott ’18 said. “I hope it won’t be con- fusing for the audience. I think it’ll work out.”

The character in each scene will be denoted with an article of clothing specific to him, such as Holmes will always wear the iconic deerstalker hat that is associated with him in film adaptations.

The director chose the unusual casting choice as it allows more variety and to give each actor a chance to play the protagonists at least once, according to Camminante.

“I’ve never read the book,” Hunter Mainzer ’18 said. “But I’m really looking forward to this play. I always enjoy his plays and his dark comedy.”