Track and Field ramps up 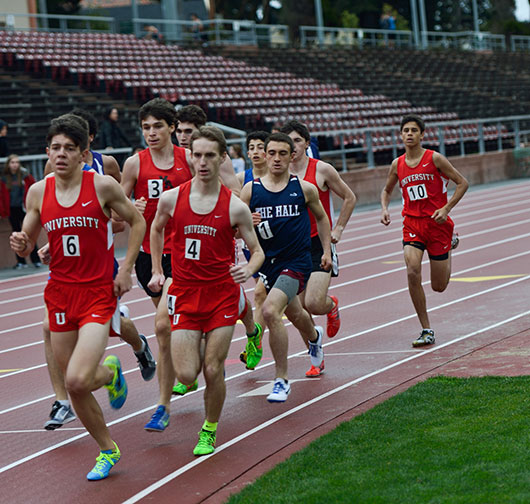 Eli Horowitz ’17 gets boxed in during a BCL West track meet last year. Horowitz looks to build on his strong cross country season in which he won nine races and finished in the top 10 at NCS and the state championship.

The Convent & Stuart Hall track and field team just began practice last week, yet it has its eyes set on its fifth league title in six years.

“I look forward to this upcoming season and my continued growth on the throwing unit,” Ben Cross ’18 said. “I want to push myself to be able to help our team win league again. Overall team success is our major goal this year, and I’m hopeful we will be able to complete it.”

Head Coach Michael Buckley is hopeful about the upcoming season, yet hesitant to brag about the team’s continued success.

“We definitely have some good young athletes and great leadership from our veterans,” Buckley said.

Alex MacDonald ’17 and Eli Horwitz ’17 look to lead the team through strong performances this year.

MacDonald, a conference record holder and league standout, says he aims to continue his streak of strong performances in his final year on the team.

After an undefeated league season last year, Eli Horwitz ’17 looks to lead the team both through action and strong character this year.

“As a team we’re coming back as the strongest small school program in our section, and everybody is going to live up to that,” Horwitz said. “Individually, I would like to run the 1600-meter in under 4:18, and maybe even go after the league mile record.”

Along with success on the track, The Hall looks to revamp its jumping program after standout athletes due to other commitments.

Coaches credit the team’s success to the effort and hard work that goes into each daily practice. Weights, running, and core exercises make up the strenuous daily routine.

“As a staff, we are really open about the fact that it’s hard work,” Buckley said. “We don’t sugarcoat it. Instead, we point out the value in that hard work, not just for the betterment of the team, but for all aspects of their life.”

Convent & Stuart Hall Track and Field athletes practices together five days a week along with attending meets, allowing the strong athletic team to also have a social aspect.

“I was really nervous to join the team because I wasn’t sure how much I liked running and was scared of the hard work,” Tyler Makras ’18 said. “Once I joined, though, I enjoyed the community aspect of the team and the coed experience. Track and field is one of the few coed sports offered, so that was a big plus for me.”

The opening meet is scheduled to take place at The King’s Academy Invitational in Sunnyvale on March 11.

“I think it should be a good team,” Buckley said. “The proof is always in the pudding. You don’t really know until the kids are out there on the track competing.”