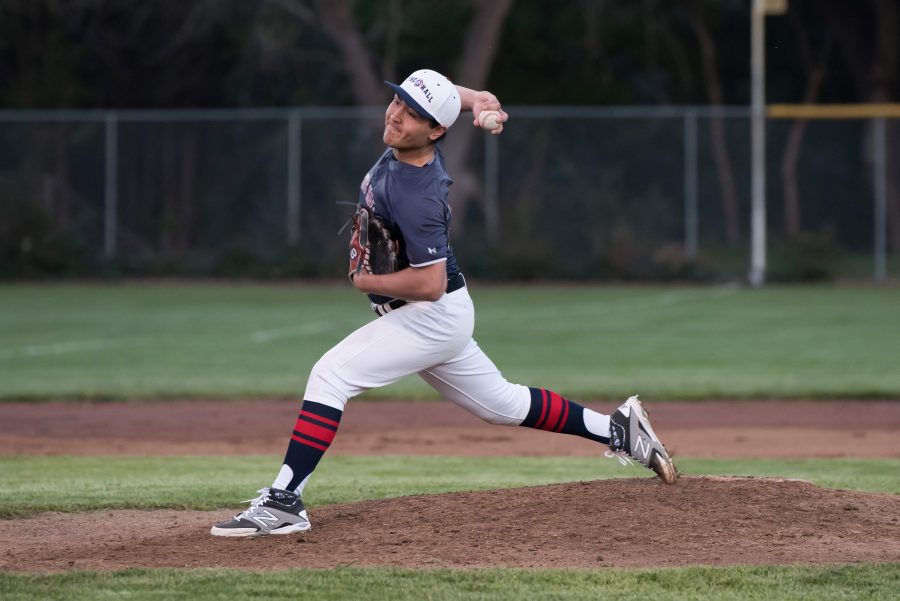 The Knights baseball team made the best out of its two-hour trek to Santa Rosa last night with a 19-7 win against Sonoma Academy in the Knights’ quest to defend their 7th straight BCL West Championship.

The season opener provided a good omen for the Knights’ season after weeks of rainouts and reschedulings.

“It was nice to get back out on the field again,” starting pitcher Achilles Arnold ’17 said. “With all of the rain, it seemed like forever since our final game of last season.”

The Knights jumped up to an early lead scoring five runs in the top of the first inning. A single from Arnold, batting in the three-hole, brought home Nicholas Hom ’18 and Angel Padilla ’18 to put the Knights on the board. Starting second baseman Giggy Andrew ’17 and third-baseman Diego DeLa’O ’20 rounded up the scoring in the first with a RBI single and a sacrifice grounder to shortstop.

In the top of the sixth inning, The Knights dashed all hopes of such a retaliation by posting ten runs in the top of the inning, putting Sonoma in danger of losing via the mercy rule. Needing to score at least four runs to stay in the game, Sonoma only managed to score two in the bottom of the inning off of Max Buchanan ’20, sending the teams home early.

Seniors Arnold and Andrew led the charge for the Knights. Arnold played a good all-around game posting seven K’s, giving up only two hits and two runs in four innings. He also got the Knights going with the RBI single in the first.

Starting second baseman Giggy Andrew led the Knights going three-for-five with three RBIs and five stolen bases. Andrew missed the entirety of last season with an injured back but showed that offseason training paid off in his triumphant return to the diamond.

Dylan Banks ’19, who was sidelined his freshman year with a leg injury, performed well pitching the fifth inning allowing only two hits with two strikeouts. Banks was able to obtain his first hit with low, line-drive, RBI single to left field.

The freshmen, who make up eight out of the 17 players, made their first appearances donning Knights gear. Freshmen Jack Pirrone, Kyo Torres and Diego DeLa’O all started for the team in right field, first base and third base.

While none of the starting freshmen were able to secure his first high school hit (an achievement which the players deem as a right-of-passage), the players were able to draw walks and make sharp plays in the field. With victory in hand, the freshmen began to come off the bench in the sixth. George Albert ’20 stepped up to the plate and popped a single to center field, notching his first hit.

The first win for the team could be pivotal in establishing momentum for the team going into next week’s four-game schedule. The Knights continue their road streak with games against Redwood Christian on Tuesday, St. Vincent de Paul on Wednesday, Tamalpais on Thursday and Sacred Heart on Saturday.

To follow live game updates and in-depth statistics of the Knights, become a fan of the team on GameChanger, or find the Knights on MaxPreps.com.