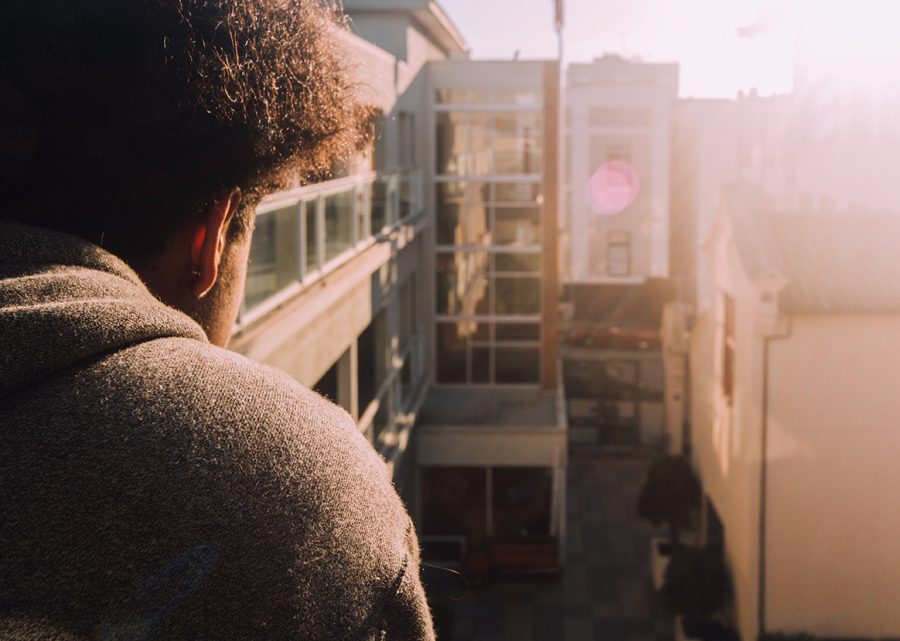 Jaden Newman ’17 looks over the courtyard at Stuart Hall High School early on a March morning. Newman has recently begun to release music online and is seeing increasing success.

Sitting on the yellow First Student bus that shuttles Convent & Stuart Hall students between campuses, Jaden Newman looked out the window and the words “She a model” came into his head. Using Garageband and a microphone in his bedroom, Newman turned the three words into a song that has been played over 2500 times on SoundCloud.

But Newman’s mind is always on his music. “I’ve always been singing, but I didn’t really start to do anything with it until Malik [Hale] told me [to pursue music],” Newman said. “Zeke [Crawford] had been telling me since freshman year, but I didn’t really listen to him because I am not very outgoing.”

Malik Hale ’16, known as D’angelo King on SoundCloud, and Zeke Crawford ’16 are a year older than Newman, but are good friends as they all played basketball together.

“I told him to [start making music] because I saw how passionate he was about it,” Crawford said. “It’s like telling a fish to swim — I just saw he needed that push to follow his dreams and I gave it to him.”

Known as Jaden Anthony on Soundcloud where he distributes his music for free, Newman uses his middle name in place of his surname.

Newman hopes to increase his 11,000 Soundcloud plays by collaborating with other high school rappers like Dame Dinero, a rapper who attends St. Ignatius College Preparatory.

Both Newman and his music have evolved since he started releasing his songs, becoming more upbeat as he tries to diversify his sound and give people a variety of songs to listen to.

“My mom actually suggested that I write a song that people could dance to,” Newman said. “My mom supports what I do and isn’t a huge fan of what I say, but she knows that this is what I use to express myself.”

Newman’s music tends to use explicit language, which may not please his mom, but its focus on girls and other topics that high schoolers can relate to has made it popular around campus.

“It’s catchy and relatable,” Gordon Smit ’18 said. “I can just listen to it anytime and it’s always nice to be able support a guy like Jaden.”

Newman says support from his family and friends has allowed him to pursue music without reservation.

“My friends are all supportive by sharing my stuff, and I have a really strong support system and that is really hard to find these days.”

Newman says he is an introvert, but his reserved nature is not seen in his songs, which he attributes to the way he feels when he records a track.

“I like to keep to myself, but when I am on a track and I can say what I want, you’ll hear me say something in a song before you hear me say it in person.”

Newman says he plans to continue to release new music as a part of his larger plan to expand his music to a larger audience.

“It is something that I loved to do,” Newman added. “The more I put out, I feel like people just finna rock with it.”