Swim team on the rise 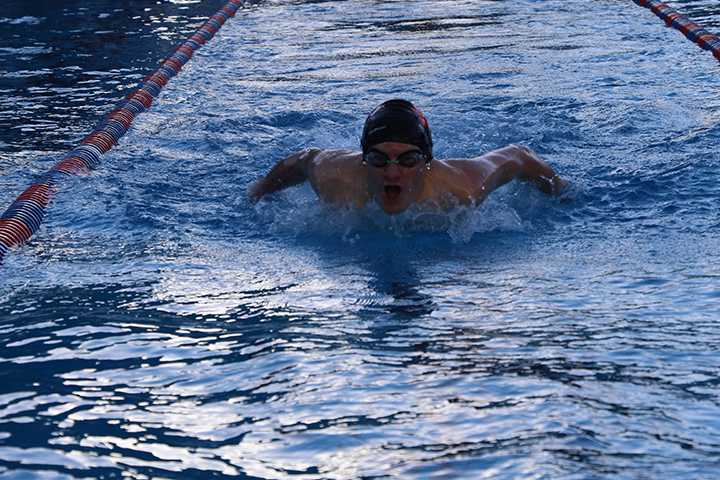 Jack Merrigan ’17 finishes an event at a recent swim meet. The Knights lost to Bentley and Drew by scores of 94-49 and 68-62, respectively.

Although swimming got off to a rocky start with three consecutive losses, the high-spirited team is on a roll.

The team pulled away with an important win against Lick-Wilmerding on April 4. Captain John Abbot ’18 led the team by placing first in his 20 lap, 500 meter race.

The team also dominated in competition against Urban on March 22, 63-28.

Individuals earn points for their teams according to which place they come in, the first place athlete receiving the highest amount of points while the fifth place athlete receives the least. Teams get a combined score of their top athletes in each event scored.

The boys fell to both Bentley and Drew 49-94 and 62-68 respectively in their first regular season meet, however the girls had a big victory against the latter, 109-50.

The girls and boys compete separately, but train together at Hamilton Recreation Center.

“It’s nice because swimming is one sport where a lot of the people involved are freshmen and you can get to know other people through it,” Max Hoffman ’20 said.

For team members, swimming proves to be just as much about getting to know Convent students and getting fit as it is about competition.

“It’s a great way to get in shape and meet Convent girls through it,” Carlo Portillo-Eckman ’19 said. “It is just fun overall.”

Despite the coed social aspect, the team has a frequent and rigorous training schedule.

“We practice five days a week,” Portillo-Eckman said. “On Fridays, we are at the YMCA working out with weights, and then the other four days we are training hard in the pool.”

Although the team doesn’t normally advance to postseason events, individual swimmers have the opportunity to go on to further competition if their times correspond with the NCS requirements.

Swimming has historically been more popular amongst the girls, but recently a new wave of male swimmers have joined the squad.

“We have more guys doing it than last year, which make it easier for us to get points in the league,” Portillo-Eckman said.