Pitching to the NCS 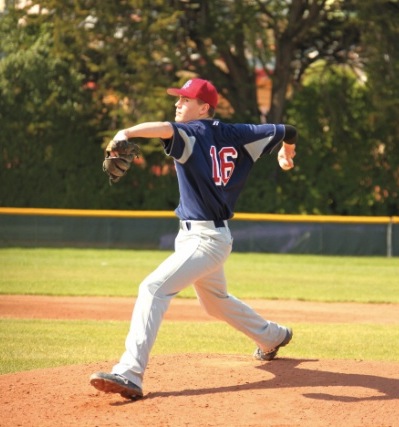 Fresh off a propelling start to the first half of the season, including that 21-0 thrashing of Leadership High that is still buzzing around, the Varsity baseball Knights exploded to the finish of the regular season with a 9-4 record in their last 13 games and qualified for the BCL playoffs. The team posted a 3.84 team ERA and a .273 team batting average during this run. The Knights first faced Drew in the quarterfinals, running them over with a score of 14-1. Junior Connor Bottum finished the game 3-4 with 2 RBIs, while Senior Jordan Chavira went 3-3 with a run scored. With the win, the Knights advanced to the semifinals to take on Marin Academy.  However, the Knights fell 1-8. Although they did not qualify for the BCL Title game, they clinched a 5th seed in the NCS playoffs. Coincidentally, the Knights’ first NCS opponent was Marin Academy, who defeated them a week before.

With a shot for revenge and a second round spot in the NCS playoffs, the Knights sent their ace Frank Duncan to the mound. The Knights scored 2 runs in the first, holding onto a 2-1 lead through 5 innings. Duncan was spectacular throughout the entire game, until Marin Academy senior Ross Bronfenbrenner knocked a two out double to put the Wildcats on top. Duncan more than deserved to win the game, allowing only 3 runs on 3 hits while striking out 10.  The Knights’ valiant season came to an end with a loss, but many of the players have their heads up for next season based on what they have accomplished this year. “I really think we can take it to the rest of the league again next year”, said senior Jordan Chavira. He continued, “Although Frank will be leaving for the next level, we have a spectacular pitcher in Ben Carrasco to fill that spot and a great chemistry in the team as a whole to compete in the same or better level than we did this year. Coach Russell was a great help to our team, especially on the pitching side of things, which is particularly why we have improved dramatically this season.” In his first year at Stuart Hall, Head Coach Eddie Russell was able to compile a 14-12 record, increasing the Knights’ win column by 6. Stuart Hall wants to thank all the fans for attending the games, the parents for support, and to the players and coaches for making Knights baseball possible. Next year should be equally as exciting and competitive!