Soccer off to best start in school history 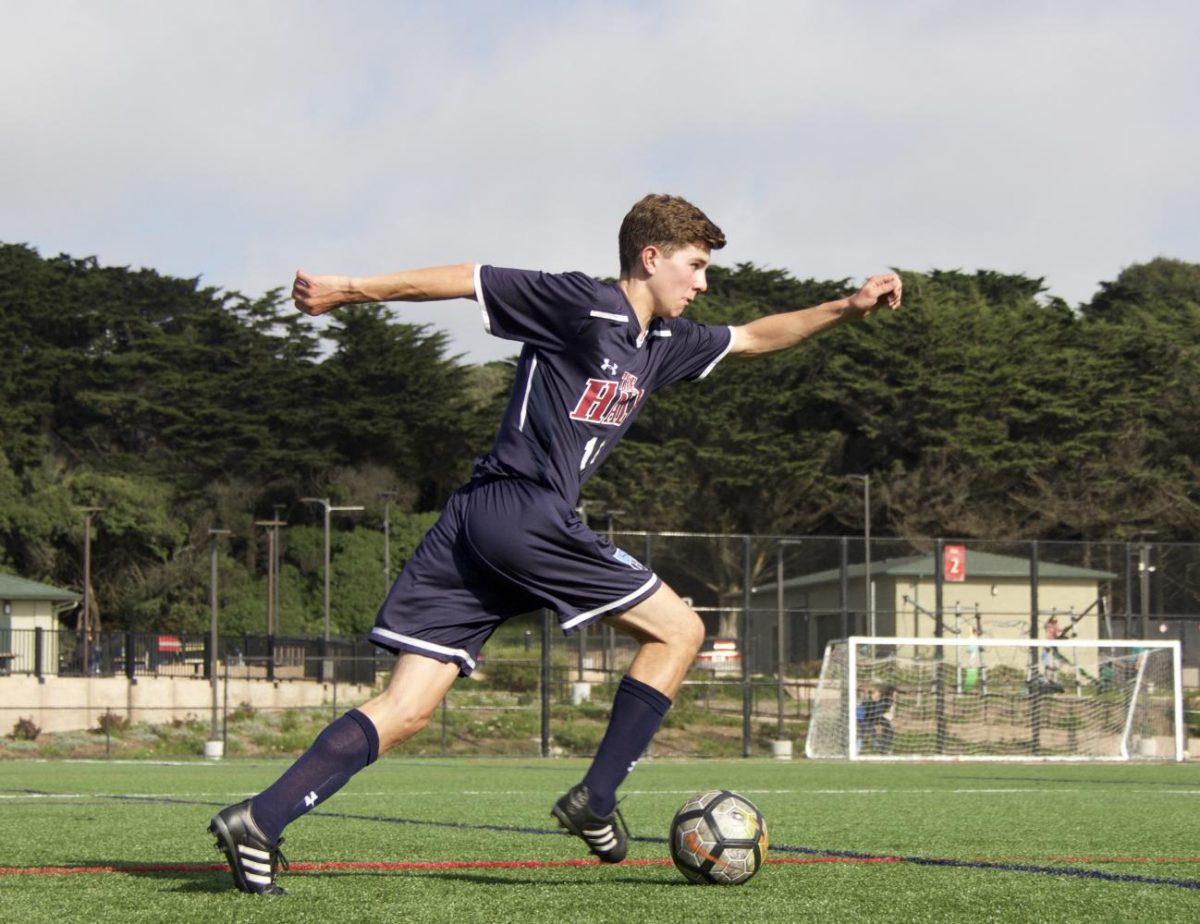 Drew Jasper ’19 dribbles the ball in a game against Waldorf at Beach Chalet. The Knights are in action today against International at 4 p.m.

Stuart Hall soccer is on a roll with a five-game winning streak putting them at a 9-0-1 record this season, as of time of press.

The Knights’ most recent win came against Bay High School on Sept. 20, which ended with a final score of 3-0.

“We worked hard in that game, and Bay was a little better than we thought,” Christian Young ’20 said. “But we were able to pull away with dub.”

Pescadero and Waldorf, the two teams to fall to the Knights before the win over Bay, were both destroyed by Stuart Hall. The Knights’ blew-out Pescadero 8-0 on Sept. 18, which was preceded by the 11-0 destruction of SF Waldorf School on Sep. 15.

“We’ve put in the time and effort to get to where we are now, and we know that as long as we keep working hard, this team will be successful,” varsity player Drew Jasper ’19 said.

The team beat Jewish Community High School 3-1 on Sep. 11, launching it into its current winning streak after the 1-1 tie against Urban that put an end to Stuart Hall’s previous four-game winning spree.

“Urban is definitely the team to beat in our league this year, and on September 28th we hope to come out on top,” Jasper said about the rematch scheduled for this
afternoon.

The Knights kicked off the season on Aug. 23 when they beat Roseland University Prep of Santa Rosa in a close match, 1-0. Stuart Hall continued to tear up competition as the team went on a four-game winning streak.

“It was a good match for our first game of the year, and we’ve definitely grown since then,” Drew Jasper ’19 said. “If we had to play them again, I think we’d have a lot of joy.”

While upperclassmen captains Angel “Cheese” Padilla ’18 and Cyrus Bernier ’19 play major roles in leading the team to success, freshman Drew Eislund has surprised teammates and fans with his skill and effort.

“The coaches told me Drew was special in the preseason,” Athletic Director Charley Johnson said. “He’s a talented player that is always around the goal scoring for us.”

Based off of the 9-0-1 record, the efforts between veteran players and strong freshmen seems to be just the right combination, as Stuart Hall hopes to take the league title this year.

“We are going to destroy the competition and win it all,” Juan Grafendorfer ’19 said.