Hall misses out on championship 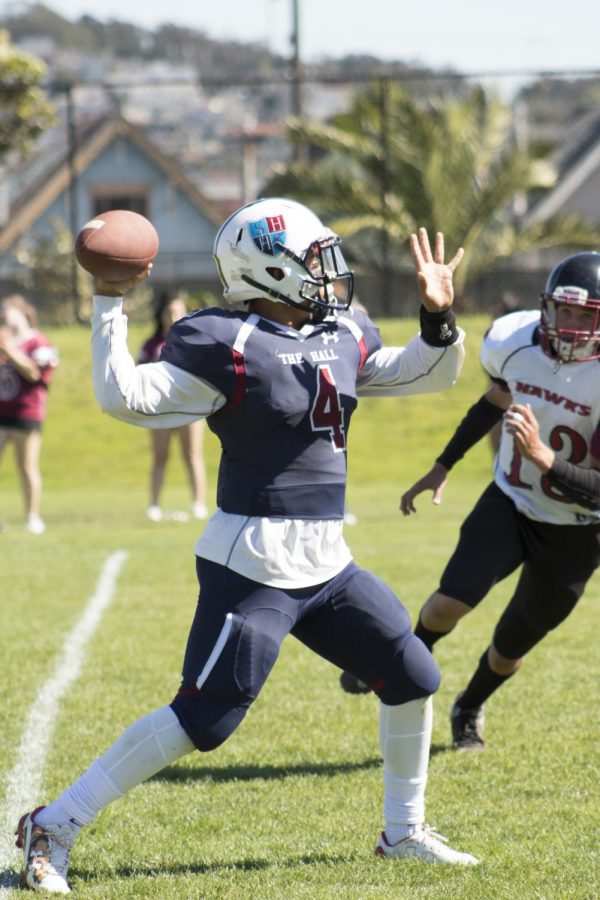 Jonathon Newsome ’19 attempts a pass during a game earlier in the season. Newsome started every game at quaterback for The Hall this season.

With Rincon Valley Christian’s win over Branson last Saturday, the Knights’ football team was eliminated from the Redwood Bowl Game and a chance at winning the league championship.

“Obviously, I wanted to make the championship game and try and bring one home for the school,” Jorim Powell ’18 said. “This is still tragic though, prayers up to the North Bay. This is a really heartbreaking thing to happen.”

This playoff scenario was caused by the fires in the North Bay. League member, Calistoga High School, was affected by the flames and were forced to miss their game against Stuart Hall.

The Knights played their last game against Branson on Oct. 21 where they triumphed by a score of 38-18. Jonathan Newsome ‘19 threw two touchdowns, one to Mitchell Krupnick ’19 and one to Powell, in addition to rushing for four more touchdowns.

Branson was held scoreless in the second half, aided by cornerback Alex Byrd’s ’19 two forced fumbles.

The Hall’s victory came on the heels of their nail-biting loss to Rincon Valley Christian. Powell recovered a fumble and ran it into the end zone for a touchdown as time ran out. The Knights failed to execute the 2-point conversion and lost by a score of 37-36. The Hall was without four of their starting seniors who were either late or missed the game entirely due to a conflict with the SAT.

Stuart Hall’s elimination marked the end of the careers of the nine seniors on the team, five of which had played since freshman year.

“We are a little disappointed since we thought we could get to the playoffs,” Cross said. “I’m sad that it’s over, but I know the whole team had a great time playing together.”