Service is in the air

SIA initiates service opportunities in the spirit of the holidays. 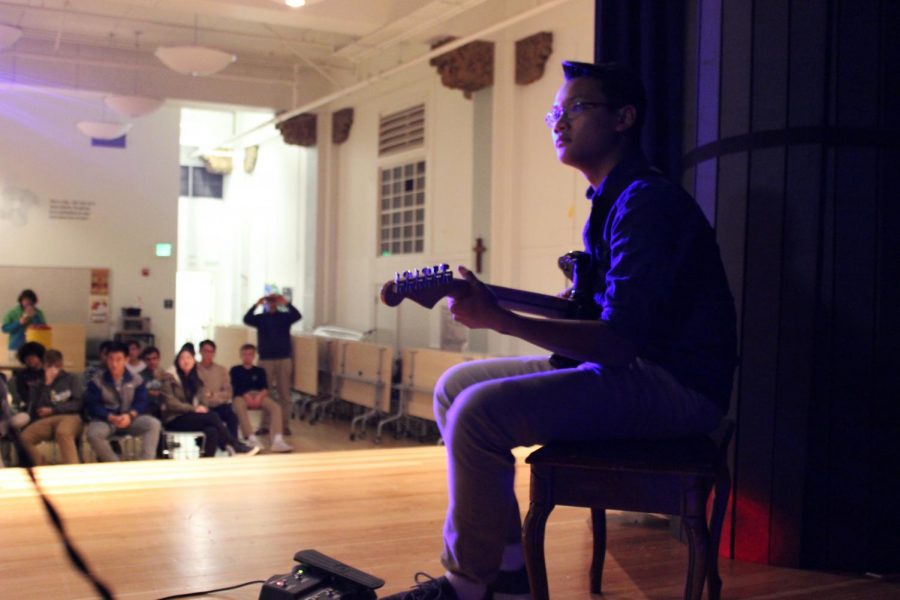 Randy Dumalig ’18 performs at the SIA benefit concert which was held on Dec. 1 to raise money for the victims of the California fires. The concert was just one of many ways that SIA tries to help others around the holidays.

Students-in-Action’s annual toy drive, which encourages the Stuart Hall community to bring in new gifts for children in San Francisco, has just concluded.

“The kids we’re giving presents to are not as lucky as we are,” Christian Mark ’19 said. “Some kids don’t receive presents on Christmas morning. It’s a good thing that we take the initiative and offer them a brighter holiday.”

The donations will benefit children in the Convent & Stuart Hall Heart-to-Heart program and children from St. Theresa Parish in Potrero Hill.

“The Heart-To-Heart program was started by our school years ago to address the needs of our local community, in particular, the Western Addition,” SIA advisor Raymond O’Connor said.

The Heart-to-Heart program also includes summer reading programs for younger children and tutoring at nearby public schools for struggling students.

SIA hosted its monthly One Less Hungry event last Sunday, Dec. 10, with students from both campuses preparing lunches in the Columbus Room and distributing them to the homeless and hungry around the city, primarily in the nearby Tenderloin neighborhood.

Members of SIA also took part in Christmas on Broadway on Dec. 1 and 2. It is an annual fundraiser the entire Convent & Stuart Hall community does for the elementary school families.

“It’s a way for people to come together during the holidays and high school volunteers help out with the activities,” O’Connor said.

In response to the North Bay fires, SIA hosted a benefit concert on Dec. 1. Grace Boudreau ’19 and Darius Ghorbani ’19 acted as the main facilitators for the concert in which students showcased their musical side. at night, ticket sales and separate donations raised over $500.

Francesca Petruzzelli ’18 played a song on the piano, and Jackson Daecher ’19 and Ghorbani performed their own rap song, with Daecher performing under the stage name “J Decks.” The concert concluded with Trevor Blanc ’19. Blanc, who won the Stuart Hall poetry contest last year, performed a spoken word rap.

Ticket sales and donations raised over $500 for the victims and their families.

“It was great to be given a chance to rap on stage,” Darius Ghorbani ’19 said. “But, it was even better to do it for a good cause.”