Grapplers look to maintain the winning ways, despite loss of talented seniors. 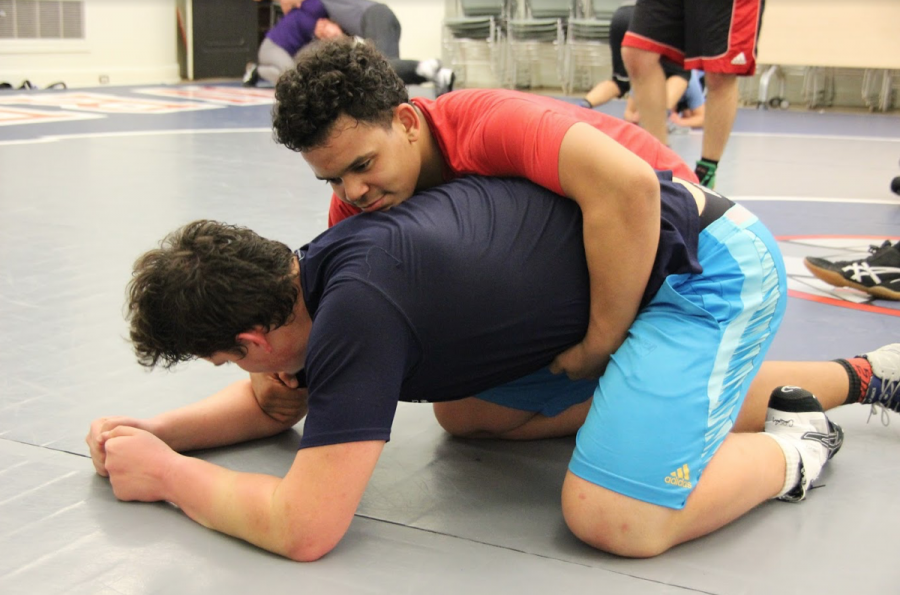 Jonathon Newsome ’19 spars with Andreas Camahort ’19 during practice earlier this week. The wrestling team practices six days a week in the Columbus Room as they prepare to contend for a league and section title.

On the heels of last year’s North Coast Section appearance and league championship win, the wrestling team is looking for another successful season that goes into the playoff season.

Lots of training, dieting, and team chemistry—as well as team members attending off-season training—are the reason for most of the success, according to Michael Liu ’17.

“I went to three or four camps for half a week to a month-long which helped me improve my strength and skill,” said Liu.

The team has an extra focus on skin health this year and is frequently disinfecting mats and requiring wrestlers to shower after practice. Common wrestling skin diseases ringworm, herpes simplex, impetigo, staph infection, scabies, and cellulitis according to Children’s Hospital of Colorado.

“I think the measures the school is taking are important and are good for the staff and us wrestlers, because of the risk of skin disease,” said Max Sanz-Pastor ’21.

The wrestling team is more worried about the threat of regional schools pose than schools in their league.

“In past years our biggest rival has been St. Patrick and St.Vincent,” Lui said. “Those two teams could bring in a challenge for us, but I’m not worried so far.”

Although the Knights defeated both St. Patrick and St.Vincent, the team is preparing for a tough match with training six days a week. Grapplers are split up into sections for veterans and the other with newcomers. Both groups are weight training and learning new wrestling techniques.

“I’m looking at continuing the excellent program Matt Woodard put out,” Austin Emerson who has taken over coaching the team, said.

“We’ve had some pretty solid practices, and I’m looking to continue that and slowly step it up every day,” Emerson said.