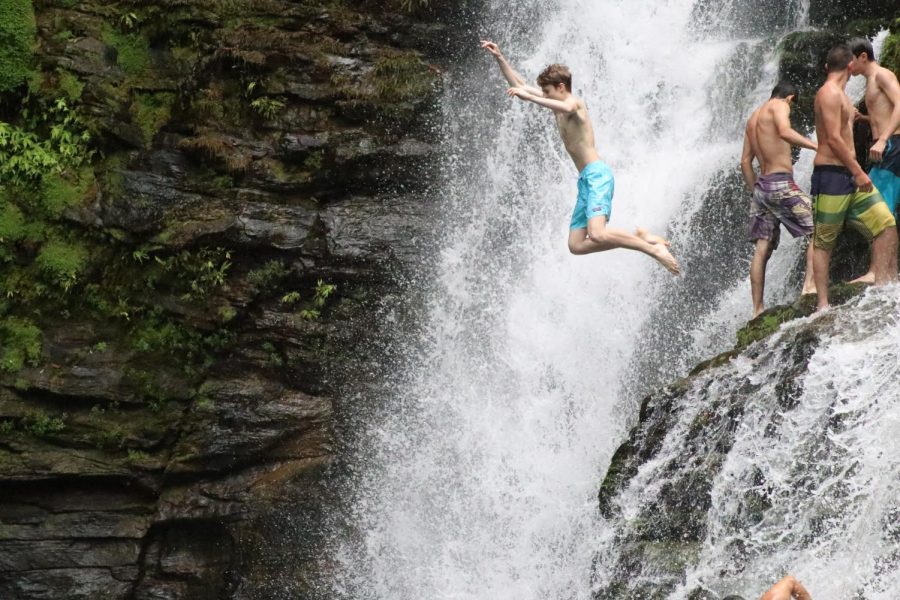 Joseph Weinstein jumps off of a waterfall. Weinstein and the rest of his trail group rode horses to the remote waterfalls with guides.

The sophomores returned from the fifth-annual Costa Rica Trip last month, bringing back not only memories but also new friendships — and in some cases, new world views.

“I made a tremendous amount of relationships in Costa Rica,” Joseph Weinstein said. “I got closer to classmates through activities and service, activities that helped me solidify many relationships. I made many new relationships that will last until graduation.”

Students were placed in coed groups that took part in rotating activities each day that included zip-lining, horseback riding, swimming, surfing and snorkeling.

Time spent on buses, airplanes and in hotels also offered opportunities for students to bond. Technology wasn’t allowed on the trip, so students were forced to entertain themselves with only their surroundings and fellow classmates.

“New friendships and friend groups were formed because people were forced to travel with each other and just spend a lot of time together,” Kyo Torres said.

“After being with boys and girls for the whole week, I got to meet some people I didn’t think I’d meet,” Torres said. “That opened my my eyes to nice people in our grade that I am now friends with.”

Costa Rican guides led activities and taught lessons about the environment and the country’s ecotourism economy.

“We learned a lot about animals and the impact the rainforest has on Costa Rica’s economy,” Weinstein said.

In addition to partaking in adrenaline pumping activities such as jumping off of a waterfall, students engaged in service. Convent & Stuart Hall students worked at local schools painting classrooms, playing with local children and clearing rainforest to make a soccer field.

“Service was a great eye-opening experience,” Weinstein said. “Putting a smile on the little kids’ faces while playing soccer with them was so rewarding. Cleaning up their school and improving their school made me so much more thankful for everything I have.”

Service, and the trip in general, also offered chances for students to juxtapose life in San Francisco to the lives of many Costa Ricans live.

“I’ve been in San Francisco for a long time, and going to Costa Rica shocked me,” Torres said. “Their lives are so different, they live a laid back lifestyle where they always just try to live in the moment. A lot of people are happy with what they have, even if it’s not enough, so I learned that I need to be happy with my own limited stuff.”

“Being a teacher, I don’t really get to interact with you guys on a daily basis,” Admissions Associate Greg Lobe said. “It was good to actually get to know the students, talk to them, hangout with them and kind of establish myself in the school community.”

Chaperones watched the dynamics between Convent & Stuart Hall students shift as students bonded and formed relationships with each other.

“I think the camaraderie of the kids stood out to me most,” Lobe said. “I liked seeing the whole Sophomore Class come together in such an exotic place. It’s a lifetime memory that Convent & Stuart Hall gives to the sophomore class, and it’s just incredible.”