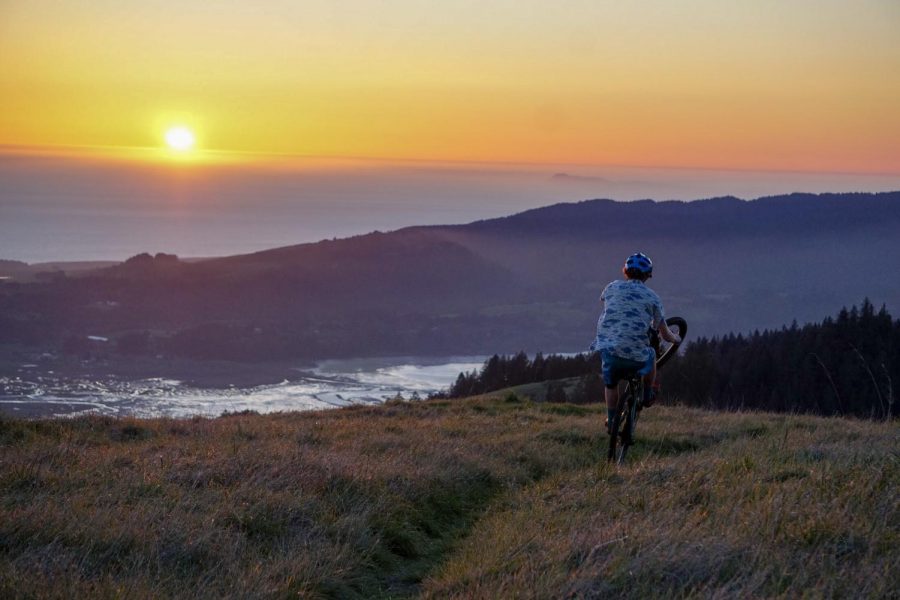 Mogan pops a wheelie on a mountain overlooking the Pacific coast. Biking to scenic views is one way Mogan enjoys leisurely riding his mountain bike.

Mountain biking enthusiast Flynn Mogan regularly dedicates weekday afternoons and much of weekends to biking, so when it came time for him to prepare for a race that takes place tomorrow, not much in his schedule needed to change.

“I try to ride five days a week,” Mogan ’19 said. “In the winter it is harder to mountain bike as much, because the days are shorter, so I end up road biking a lot as I can get more miles in a shorter amount of time.”

Mogan’s training regime may sound brutal, but he says the adrenaline rush that comes with biking trumps its strenuous physical aspects.

“Even though mountain biking is physically challenging, I look at it as purely fun,” Mogan said. “Obviously you get a great workout from biking too.”

Although Mogan rides five days a week whether or not he has an upcoming race, riding in preparation of a big race is different from a leisure ride.

“I work on climbing more and trying to get in the best shape I can be in for the race,” Mogan said.

Climbing will be important for the SeaOtter Classic on April 19. Mogan won’t be racing in a downhill trail race, but he will rather be participating in a style of race that encompasses both uphill climbs and downhill descent.

“A downhill race is a time trial down a hill,” Mogan said. “I am racing in an Enduro race, which is basically four to six downhill stages. The catch is that you have to bike back up in between stages as part of the race.”

While climbing is involved in the race, only the downhill stages are timed. The climbs are meant to wear the athletes down, so that racers are tested while fighting through fatigue and pain.

“Once you are finished with one downhill stage you are able to take a break at the bottom before the climb back up,” Mogan said. “You don’t have to rush to the next stage for a specific start time.”

“My expected start time at SeaOtter is 9 a.m.,” Mogan said. “You get some warmup time before the race, and I typically do a few laps around some stages and some sprints to get my muscles warmed up. I expect to end around 1 or 2 p.m.”

Enduro racing has been Mogan’s preferred racing style ever since his first Enduro race.

“My first race was a California Enduro Series race in Monterey,” Mogan said. “It was Memorial Day Weekend in 2016, my Freshman Year, and I placed middle of the pack. I felt like I did poorly, but 25th out of 40 kids wasn’t horrible for a first race.”

Before Mogan started competitively racing, biking was still a major part of his life.

“I started really getting into mountain biking in seventh grade,” Mogan said. “When my brother was a freshmen at Bay, I was in fifth grade, and he became friends with a kid named Chris who was really into riding mountain bikes. I always thought mountain biking was really sick, because it is a sport that involves exercise and exhilaration.”

Mogan’s passion to ride bikes turned into a love for racing and eventually an interest in other mountain biking related activities.

Media in the biking world, like media in other extreme sports and outdoor activities, mainly involves blogging and photography, according to Mogan.

“Pinkbike.com, a website that is the equivalent to the Facebook of the mountain biking world, has a photo of the day competition,” Mogan said. “Those who win the daily competition have a chance of winning $10,000 and a trip to Whistler to shoot with Pinkbike.com. My friend Zev and I try to get photos that can be posted as the photo of the day.”

A substantial cash payout would be helpful for a high school kid performing competitively in a sport that isn’t cheap. Although mountain biking equipment can cost thousands of dollars, Mogan is able to get biking gear with a deal.

“I have connections in the biking industry so I am luckily able to get gear with special deals,” Mogan said.

Mogan will be riding the same bike he uses to train and ride for fun during tomorrow’s race — a bike that is tailored to Enduro racing.

“My current bike is an Enduro bike, basically a combination of a downhill and a cross country bike,” Mogan said. “It is relatively light so that I can ride uphill comfortably, and it is extremely tough so it can handle downhill stages like the ones I will face this tomorrow.”