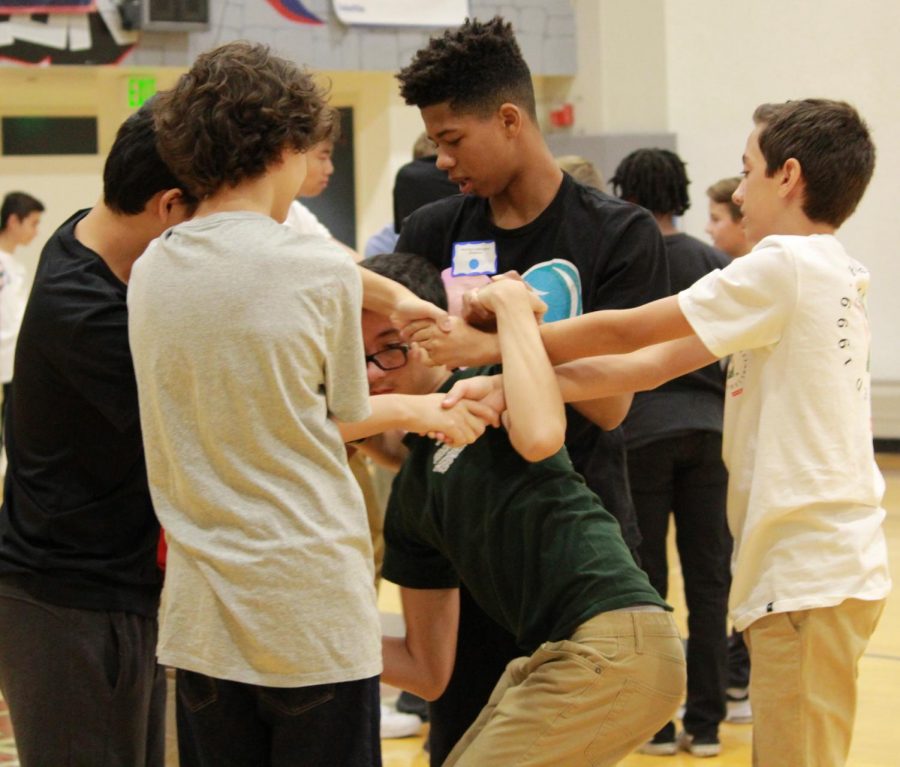 Ninth graders play a game of human knot during Freshman Success Aug. 15. Orientation took place on both campuses over a period of two days and also served as a social opportunity

Incoming freshmen took part in a variety of games and activities at Freshman Success Aug. 15 and 16 as they got to know each other and become familiar with their classes, schedule and school resources.

“Every new year is like a fresh start with a whole new crop of personalities and talents,” Grade 9 Chair Sarah Garlinghouse said. “They have a lot of energy and a lot of spirit, and they seem fantastic.”

Stuart Hall freshmen met at the Pine/Octavia Campus, received an introduction from Head of School Tony Farrell and played games like human knot and knockout with strength and conditioning coach Barclay Spring. Freshmen then gathered at St. Benedict Parish for the Deaf to meet their advisors.“This is a very important event for people to get to know each other,” freshman Ansh Ghayalod said. “It’s important for people to make friends.”

While the event began as a single-sex experience on Thursday, Friday was entirely coed.

“The coed part of Freshman Success was very important because it was a good opportunity to branch out beyond the girls that I had already spent time getting to know,” freshman Callie Akel said.

Freshmen started their Friday at their respective campuses and then came together for activities such as attempting to build marshmallow and toothpick sculptures in coed groups at the Broadway Campus. The freshmen ended their day at the Presidio Bowling Alley.

Although freshmen are without emails and many resources they will need this coming school year, the grade chairs told them not to worry.
“No need to be perfect in the first couple of weeks,” Garlinghouse said. “We’re here to help so always ask for help.”