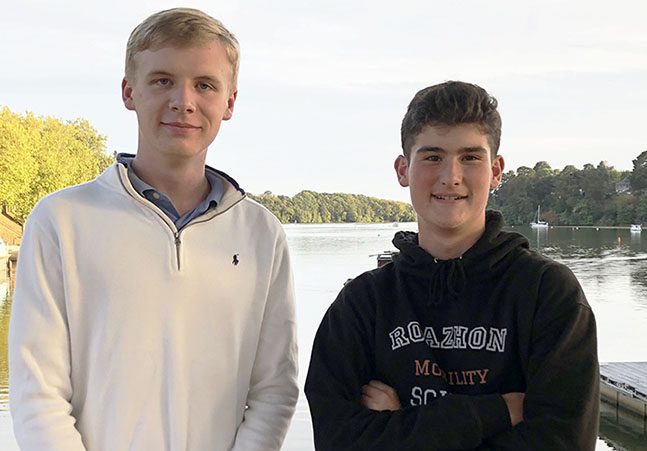 Junior Vincent Behnke stands with exchange student Jules His while visiting a lake in Sucé-sur-Erdre near Nantes, France. Behnke went to Lycée Sacré Coeur la Perverie in September 2018, and His visited Stuart Hall in January 2019.

The Sacred Heart network’s Global Exchange Program is looking to send students to sister schools around the world for a two to six week immersion experience with a host family.

“Students probably aren’t aware that we had kids that we’re exchanging halfway around the world, to Europe, to South America, to Asia, to Australia,” Lobe said.

“Last year, in September, I went to France and stayed in a city called Nantes with my host Jules,” junior Vincent Behnke said. “It was a really incredible experience.”

Students on exchange go to classes at other schools, but do homework from back home. Participants say this approach provides students with a new viewpoint on how other cultures learn.

“Jules came here in January and we had a really great time with him,” Behnke said. “He had his own schedule and went to his own classes. He went to [school trainer] Barclay [Spring] every day on his own too.”

Lobe says the goal of the exchange program is to improve language skills and acclimate students to a different culture and way of life.

“This world is getting smaller by the day,” Lobe said. “ It’s more important now than ever to be able to understand people who are different from you, whether that’s a different religion, a different ethnicity or from a different country.”

Behnke says Jules was able to fully integrate into the Stuart Hall community and make himself at home in San Francisco.

“To anyone who’s thinking of doing it, I’d say just do it,” Behnke said. “It helped my French so much, and I got by on French II. Just do it because it’s such a great opportunity.”