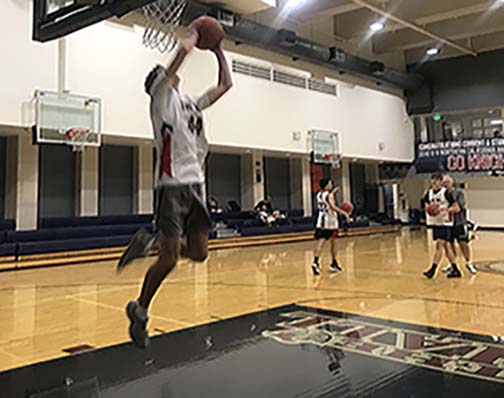 Junior Mac Hatfield shoots a reverse layup during practice in The Dungeon. The Knights began the season without power forward Nigel Burris, who transferred to Archbishop Mitty High School.

The Knights say they need to be prepared mentally for the season after losing star players, but they are striving for more success after going well into the playoffs last year.
“I think we’ll have a good season if we have the mindset of going out there and beating one team at a time,”
center Max Bucchioni said. “We might not go to state, but we’ll have the opportunity to compete [against] and beat competitive teams.”
The team lost key players at the end of last year, but coaches say they have been replaced with other talent.
“We lost a massive group at graduation, plus the transfer of Nigel Burris, ” athletic director Charles Johnson said. “We have some newcomers in Luke Moore, Josh Puccinelli and Makanna Leavitt.”
Players say they have already started preparing for the season.
“I’ve been playing a lot of basketball in my free time,” guard Luke Moore said. “I also have been working out with Coach Barclay, who’s helping me get stronger, better, and more ready for the season.”
Members of the team say they are working together better than ever.
“The team chemistry is there, and you can see it in the open gyms the school has been holding,” forward Josh Puccinelli said. “No one on our team is selfish, and we can get anything done together.”
Coaches and players say they believe the squad is ready for the season.
“We should be a very fun team to watch and have the potential to be a very
solid club,” Johnson said. “We want to win league, NCS and even possibly the state championship. Let’s dream big.”