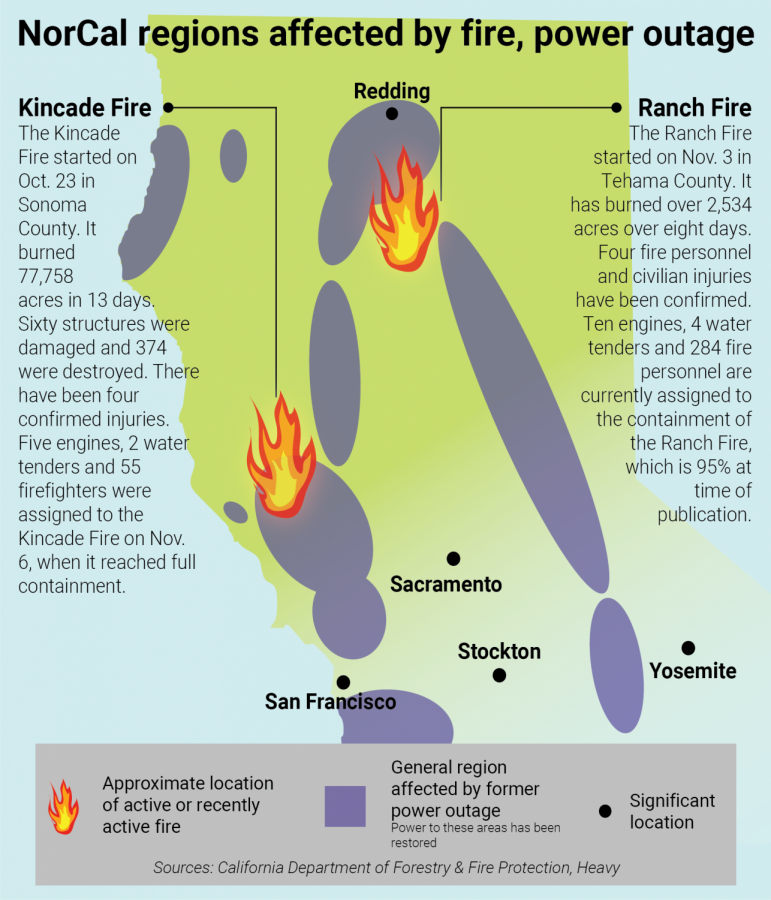 By Will Burns & Henry Murray, Reporters

North Bay wildfires caused mandatory evacuations and deliberate power-outages for many California counties in late October and early November.
Pacific Gas and Electric Co. implemented its largest-ever blackout in order to prevent more fires from starting due to high winds knocking trees into power lines.
“I was evacuated out of my home [in Sonoma County] Saturday at lunchtime,” social sciences teacher Jason Enevoldson said. “I didn’t get to go home till Thursday night.”
Enevoldson is one of nearly 200,000 Bay Area residents who were forced to evacuate due to the hurricane-level winds spreading the Kincade Fire across nearly 78,000 acres of land. Fire victims weren’t the only ones impacted.
“My family lost power for around three days, and I went to my grandmother’s house in San Francisco in order to do homework and charge my electronic devices,” senior Will Larson said. “I believe it was not necessary for PG&E to shut off Marin’s power as it was not very windy.”
Marin was one of the 12 Northern California counties to lose power as a result of the fire, leaving many Convent & Stuart Hall students and teachers without electricity. Enevoldson, having to actually evacuate, says the event was eye-opening.
“We had packed most of our stuff,” Enevoldson said. “It’s hard to think: if you can pack one bag, what are you going to put in it?”
Enevoldson says most people should have a “go bag,” which can be grabbed in an emergency situation and contains necessities one would require to survive for 72 hours when evacuating from a disaster.
“You’re supposed to get a piece of paper, stick it to your door and write ‘evacuated’ on it,” Enevoldson said. “When the police come through they can get through the neighborhoods really quickly. [Evacuation] opens the possibility for looting, too.”
As of Nov. 4, there have been three reports of looting in evacuated areas due to the Kincade Fire. No arrests have been made.
“People who get evacuated hopefully have friends or families outside the evacuation zones,” Enevoldson said. “If you have nowhere to go, they have shelters, but they fill up really quickly.”
There are 12 shelters open in response to the Kincade Fire, according to NBC Bay Area. However, their combined capacity is not sufficient enough to take in all the evacuees, leaving many with few options in terms of where to go.
“We went to Novato because we had friends there,” Enevoldson said. “There was no power, but we had food. We moved back on Thursday and I remember [how] nice Thursday night was.”